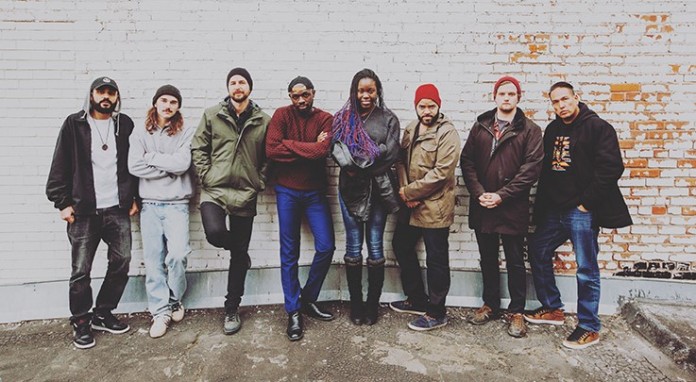 A Redditor commented on People of the Sun’s latest single “The Lick” with, “why does this actually slap tho?” This is high praise coming from the land of cake days and, if Reddit gold and rocket ships are modern oracles of skyrocketing success, this Canadian big band is one to keep an eye on — stat.

With a freshly pressed EP already available, People of the Sun are an eight-piece hip hop/R&B band that came together in another very ‘of today’ way…

They count The Dead South, Hoodoo Mafia, Andino Suns, Def3, the Saskatchewan Roughriders’ Drumline, and more, among their respective rosters of artists they’ve worked with. And, when COVID-19 hit, Mehlsen said he knew “there were a bunch of musicians I had always admired who were now, because of this circumstance, fresh out of work.

“I thought, ‘rarely are we all home and idle,’ and that it was a good time to build a dream band.”

And so from this dynamic abundance of cultural perspective, influence — plus a global health crisis both forcing and fomenting new ideas — the group formally introduced themselves this past November with a six-track debut EP, Last Day of Summer.

“The plan was to make six songs in one shot,” Mehlsen explains. “When I was setting the session up, I knew it was going to be a long, hard night, and no one else really knew what I was planning.

“But they trusted me, and they all really delivered. So much respect was born in that moment.”

“Making music is a dope thing, and it was a humbling experience to witness the band’s evolution in real-time,” Info Red (Brad Bellegarde) says. “Last Day of Summer is like the first day in the next chapter of my music career.”

“The creativity and the energy of the crew changes so much when doing things live — and only have an evening to record,” Reoch says. “I honestly didn’t really know what I was going to play for these songs until we were actually recording, but we definitely couldn’t have captured the energy of these songs any other way!”

“I don’t have too many friends in Saskatchewan that are not Nigerian,” Jegz (Uniniafore Benita Jegede) says. “This band was a nice place to meet people, and it was fun and very therapeutic to just get away from the world and get some good vibes.”

“Making Last Day of Summer was such a thrilling experience,” ADEOLUWA (Isaac Adeoluwa Atayero) recalls. “I’ve always wanted to make a ‘live off the floor’ record, and it was exciting to do it with extremely talented people.”

“I admit I was exhausted after recording each of our songs back to back in the way that we did, so I didn’t give it too much thought after we finished,” Lane shares. “Listening back to our recordings was an entirely new experience.”

“I was impressed with Erik’s focus,” Henry adds. “Within a month or two of joining the group, we were already recording music videos!”

“Even though the record probably could’ve been more ‘perfect’ if we had recorded it in the studio,” Mehlsen offers, “we made it live off the floor because it properly shows a group of people from different backgrounds working together.

“We all have different backgrounds, but live in the same city,” he continues. “And once you make something together, you have a friend for life.”

“People can feel the real love when they hear this music.”