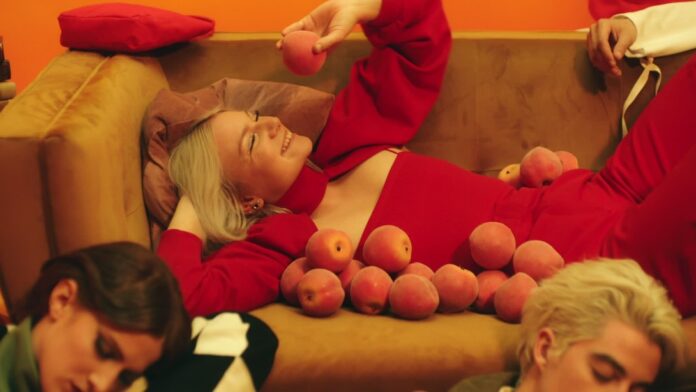 After turning a short TikTok video filmed in her car into an empowering body acceptance anthem with over 70 million streams, Vancouver -based pop singer and songwriter JESSIA shares the music video for her breakthrough anthem “I’m not Pretty” today.

In the visual, JESSIA steps through the looking glass to confront her insecurities in a playful and tongue-in-cheek kind of way and falls down a rabbit hole into an imaginary yet cinematic eye-popping peach filled wonderland inspired by Roald Dahl’s ‘James and The Giant Peach’. The video illuminates the rising artist’s fun and quirky persona, which is as infectious as the song itself.

“Filming the music video was such a surreal experience,” JESSIA explains. “I kept looking around set and asking myself, ‘are all of these people here for me and my song? What? Am I really here right now? What a time. It was such a party on set! SUCH A BLAST!”

“I’m not Pretty” initially exploded on Tik Tok when JESSIA introduced an acapella hook of the song by sharing, “I don’t know if this is total trash, or if it’s actually a bop.” Turns out, it was the latter as the clip racked up 1 million views in a day. The candid lyrics describe a journey towards self-love and the emotions one can feel while on its path – a message that has instantly resonated with audiences all over the world. Since January 1, the clip has accumulated 100 million views, while the official version produced by 4x JUNO Award nominee, singer, songwriter, and producer Elijah Woods has cracked 43 million Spotify streams as she averages 5.3 million monthly listeners on the platform.

In addition to early support from international tastemakers, Grammy award winning singer, songwriter, and producer Ryan Tedder, personally reached out to JESSIA upon hearing the song to champion her work and collaborate. Together they are putting the finishing touches on new music—due out soon.