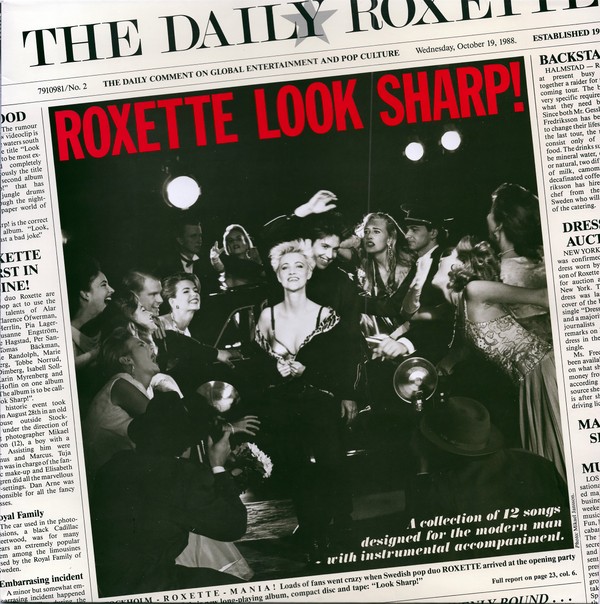 Swedish group Roxette celebrates the 30th year Anniversary of their third album “Joyride” – the much anticipated follow-up to the band’s spectacular global break-through with the album “Look Sharp!” in 1989.

The three US #1 singles “The Look”, “Listen To Your Heart” and “It Must Have Been Love” and other big hits like “Dressed For Success” and “Dangerous” had almost overnight transformed the dynamic duo of Marie Fredriksson and Per Gessle into a world-wide hit phenomenon that would soon pave the way for other Swedish pop acts during the 90’s.

Unsurprisingly, “Joyride” therefore carried a heavy weight on its shoulders; the album was supposed to cement Roxette’s new-found status as a global hit phenomenon, proving that the chart successes of 1989 and 1990 was no fluke. Some artists would have found this pressure hard to handle. But Roxette delivered. Or as Per Gessle remembers:

“Björn Ulveaus once told me how he felt when ABBA recorded “Mamma Mia”. It was like the whole pop world revolved around them. Their sound was spot-on, they had produced a string of hits, and everybody was waiting for the next one. But despite that pressure, they never thought it was difficult to deliver. And that’s exactly how I felt about ‘Joyride’. I had read an interview with Paul McCartney, where he said that ‘writing songs with John Lennon was just a long joyride’. The song came very easily, and I instantly knew it was a hit: it would provide the album with a great title, ‘hello, you fool I love you’ was a cool hook. Everything was there. With ‘Joyride’ the whole album was in the can.”

The world, however, was hardly on a joyride when the album was released. Releasing an album called “Joyride” and flying around the world for interviews and promotion when the US Army had just launched Operation Desert Storm in Kuwait, can hardly be called optimal timing.

But in the spring of 1991, most things seemed to go Roxette’s way. The cheery title track zoomed up the charts, giving the group their fourth #1 single on the Billboard Hot 100 charts in the USA – setting a record that still holds for Scandinavian acts – while future singles like “Fading Like A Flower”, “Spending My Time” and “Church Of Your Heart” was waiting in the wings. Soon the album hade passed the 11-million mark.

“Marie’s superb vocals is one of the main reasons that Roxette – and not least our biggest album ‘Joyride’ – was such a huge success. Around this time, she was at the absolute top of her game, effortlessly creating lasting wonders with my songs. Beside the big hits, ‘Joyride’ also contains ‘Perfect Day’, ‘Hotblooded’, ‘(Do You Get) Excited?’ and not least ’Watercolours In The Rain’, a song that Marie had written wonderful music to, and I happened to have a fitting lyric in the drawer”, Per says.

This autumn the 30th Anniversary of ”Joyride” will be celebrated with the release of a 4-album vinyl and a 3-CD box, containing the original release as well as previously unreleased or hard-to-get material that paints a fuller picture of a ride that still puts a smile on people’s faces. C’mon, join the joyride.