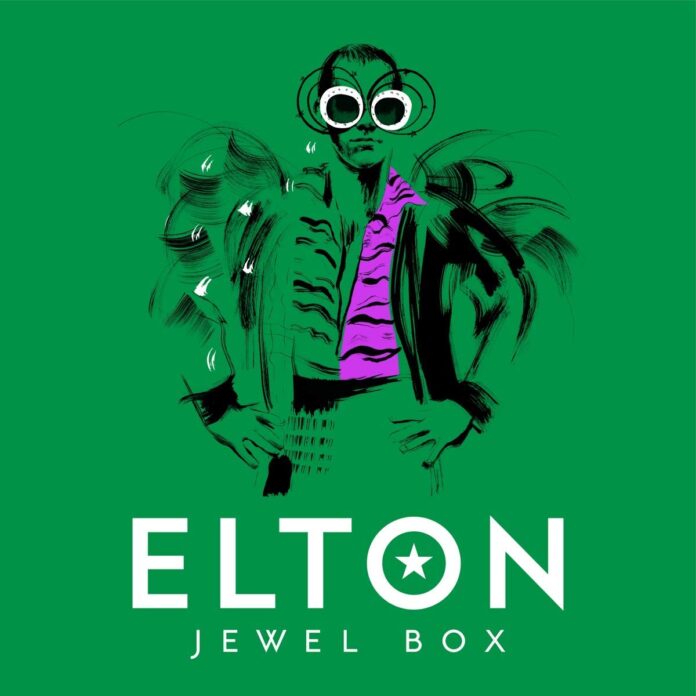 Elton John today announces that “Scarecrow,” the song that began his legendary songwriting partnership with Bernie Taupin in 1967, and five other deep cuts from Elton: Jewel Box have been made available worldwide on streaming and digital formats for the first time. The release, and with it the unification of the complete Jewel Box on digital formats, is timed to celebrate Elton’s 74th birthday (March 25th, 1947).

Elton and Bernie Taupin first met in 1967 after answering an advert placed in the NME that summer searching for new songwriting talent. Despite the lyrics being written before the 17-year-old Bernie and 20-year-old Reg Dwight had even met, “Scarecrow” marks the first time Elton put his music to Bernie’s lyrics and set the pair on the road to becoming one of the greatest and most enduring songwriting duos and friendships of all time. “Scarecrow” will always hold a special place amongst one of pop and rock’s greatest songbooks, and today’s digital release will provide fans new and old with a tantalizing insight into the rich treasure trove of 24-carat classics the twosome would create over the coming decades. It would later be referenced in Bernie’s lyrics to “Curtains” from the seminal 1975 classic album Captain Fantastic and the Brown Dirt Cowboy – “I used to know this old scarecrow, He was my song, My joy, and sorrow.” And in 2018, when Taupin sold his lyric manuscripts, “Scarecrow” would be one of the only original sheets he didn’t take to auction, its place in rock history and the duo’s story deeming it too important.

Elton says, “‘ Scarecrow’ will always have a very special place in my heart, and I know that Bernie feels the same way too. It’s the song that started it all. This last year in lockdown has given us all time to look back and reflect – finding this song again when I put together the Jewel Box and thinking of everything that has happened in our careers and friendships that has sprouted from this one point is just remarkable. Jewel Box contains the embryos of something special, and Scarecrow goes right to the heart of that, naive compositions of a time and place that went on to become something very special indeed. What a wild ride it’s been so far, and how lucky we are to have found each other.”

Originally released on November 13th via UMe, to a hail of critical and commercial acclaim, Elton: Jewel Box is an unrivaled collection containing 148 songs spanning 1965 to 2019 on 8CD, 4LP, 3LP, 2LP, digital download, and streaming formats. With the release of the last 6 tracks from the boxset “Scarecrow,” “Holiday Inn,” “Keep It A Mystery,” “Smokestack Children,” “Two Of A Kind,” and “Conquer The Sun,” Elton: Jewel Box is now available in its entirety for the first time ever on digital formats.

Elton: Jewel Box is yet another marker in an incredible few years for the world’s favorite singer-songwriter. Since the release of the ultimate greatest hits album Diamonds in 2017, Elton has undertaken a breath-taking 4 years of activity that are unmatched in their ambition, reach, and impact across generations of music fans. Elton announced his record-breaking Farewell Yellow Brick Road tour at New York’s Gotham Hall in January 2018 with a typically forward-looking virtual reality spectacular. Encompassing 5 continents and over 300 dates, this 4-year-long tour started in September 2018 and marks his retirement from touring after more than 50 years on the road. August 2018 saw Elton named the most successful male solo artist in Billboard Hot 100 chart history. In 2019, the Farewell Tour was named Billboard’s Top Rock Tour and Pollstar’s Major Tour Of The Year. 2019 also saw the release of Elton’s critically acclaimed global bestselling autobiography, Me. The paperback version of the release topped the Sunday Times Bestsellers list in 2020. The 2019 epic fantasy musical motion picture of Elton’s life, Rocketman, has been a commercial and critical hit, taking over $200m at the box office. It has won an Oscar, 2 Golden Globe Awards, and a Critics’ Choice Award and garnered BAFTA nominations. Its soundtrack was also nominated for a GRAMMY Award. 2019 also saw Elton awarded the Légion d’honneur, France’s highest award, for his lifetime contribution to the arts and the fight against HIV/AIDS, and he was also honored with both a Royal Mail stamp collection and Royal Mint coin collection. Diamonds, the ultimate greatest hits package of Elton and Bernie, has spent a staggering 175 consecutive weeks in the UK album charts to date, including 78 weeks in the Top 20, selling over 1.5 million copies worldwide in the process and recently reaching 700,000 sales in the UK alone. As a long-standing advocate for emerging talent, Elton continues to work with the British government, music industry, and artistic community to find positive solutions to the challenges facing young musicians needing to tour Europe. His Apple Music Rocket Hour show also provides a regular showcase for the next generation of emerging artists.

An unparalleled career that has forever changed the cultural landscape, Elton John’s collaborations with Bernie Taupin and others continue to shape the cultural landscape, break records, top charts and win new fans across the generations. We’ve had the book, the film, the farewell tour, the fashion collections, and the greatest hits. And now, with the completed version of Elton: Jewel Box available on digital formats, fans finally have the treasure trove of previously unheard and unreleased tracks they have been waiting for from the world’s favorite singer-songwriter.