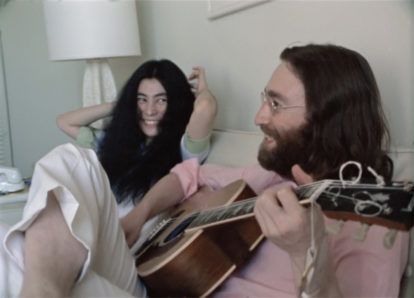 Before famously recording their legendary pacifist anthem “Give Peace A Chance” at their Bed-In for Peace at the Queen Elizabeth Hotel in Montreal on 31 May 1969, John Lennon and Yoko Ono rehearsed an early version of the song while at the Sheraton Oceanus Hotel in the Bahamas just days before, on 25 May.

The performance, which was captured by the Lennon’s film cameraman Nic Knowland and sound recordist Mike Lax, has never been released until now and is the earliest known recording of the song.

The video features John humorously ad-libbing lyrics for the verses before being joined by Yoko for the memorable chorus that became an anti-war anthem for a generation and which remains an enduring protest song more than 50 years later.

Originally set for New York, the second Bed-In was relocated to the Bahamas after John & Yoko were denied entrance into the U.S. because of John’s 1968 cannabis conviction. However, due to the layout of the hotel and the sweltering Bahamian heat, the couple flew to Toronto the following day and eventually settled in Montreal, chosen for its close proximity to New York and the American press, which they were hoping to use to get the attention of President Nixon.

The couple holed up in the hotel for a week where they gave unlimited access and endless interviews, in order that their extended honeymoon serve as a “commercial for peace.” The event culminated with the recording of John’s first solo single and the first to be credited to the Plastic Ono Band, “Give Peace A Chance.”

Surrounded by fans, Hare Krishnas and having spent the week with a host of notable friends and celebrities like LSD advocate Timothy Leary, singer Petula Clark, disc jockey Murray The K, comedian and civil rights activist Dick Gregory and comedian Tommy Smothers, who accompanied on acoustic guitar, John and Yoko performed the song in bed, dressed in their pyjamas and helped provide the soundtrack to a revolution.

Released just a month later in July 1969, backed with Yoko’s “Remember Love,” recorded that same night after their guests had left, the single reached No. 2 on the UK Singles Chart and No. 14 in the U.S. on the Billboard Hot 100, giving John his first hit outside of The Beatles.

Although originally credited to Lennon-McCartney due to his publishing agreemeent with Paul, John later revealed the song was written by him and Yoko and that she should have received the co-writing credit.