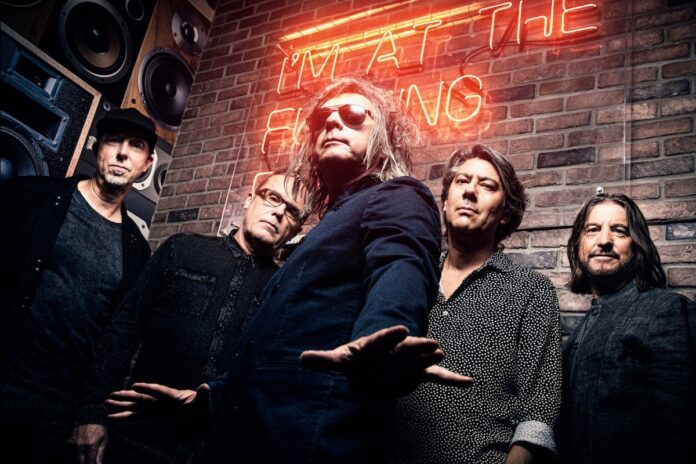 The SOCAN Classic song, I Go Blind, by the popular alt-rock group 54-40, enjoyed success twice: the first time as recorded and released by the band in 1986, and the second time a decade later when a cover by Hootie & The Blowfish unexpectedly became a Billboard Top 5 hit. The Canadian Songwriters Hall of Fame will induct the song into its permanent and interactive exhibition at the National Music Centre in Calgary.

I Go Blind, written by 54-40 members Neil Osborne, Philip Comparelli, Brad Merritt, and Darryl Neudorf, continues to enjoy success, with a delightful rootsy re-do appearing on 54-40’s 2016 unplugged album “La Difference.” As Osborne reflects, “It’s a great feeling when you can present a song in a different light and it still translates.”

However, success didn’t come right out the gate. Formed in 1981 in Vancouver, the band often recorded songs in the middle of the night since they all had day jobs. Following the single’s release of their 1986 self-titled independent album, 54-40 was signed by Warner/Reprise Records, but the label disappointingly chose to distribute I Go Blind in Canada only. Undeterred, 54-40 forged on with other projects, steadily increasing their fan base and album sales over the ensuing decade.

Then, I Go Blind took a new lease on life when in 1994 Hootie & The Blowfish recorded a faithful cover as the B side to the single Hold My Hand. After this version was featured on the hit television sitcom “Friends” and the show’s soundtrack album, it skyrocketed to the top of the charts.

“When the Hootie version of I Go Blind came out it was a bit of vindication for us,” Brad Merritt proudly explains. “Here’s a song that the label was not going to release in the U.S., but radio started playing it on their own. Without any kind of radio promotion, it got to No. 2 in the country with zero push. That tells you something. That’s a really strong song.”

I Go Blind is essentially folk-roots with an edge; Neil Osborne describes its riffs and unconventional structure as an “organic mash-up.” There’s a hypnotic feel in the insistent guitar riff and the repetition of the words “I go blind.” The meaning of its lyrics is revealed in the song’s music video that contains images of war and Third World poverty; and that seeing and hearing these issues in news reports hourly, can drive us to the point that we become blind to its significance.

By February 1997, the song that 54-40’s label had deemed unworthy of support was charting on not just one, but several Billboard charts. It peaked at No. 2 Adult Top 40 and hit No. 13 (Hot 100), No. 17 (Mainstream Top 40 Airplay) and No. 22 (Adult Contemporary), and reached No. 13 on Canada’s RPM chart. The royalties enabled 54-40 to build their own Vancouver recording studio. It also appeared on Hootie & The Blowfish’s “Scattered, Smothered and Covered” album in 2000.

54-40 has had a string of gold and platinum albums, a B.C. Entertainment Hall of Fame Star, and has been inducted into the Canadian Music Industry Hall of Fame. The band has won two West Coast Music Awards and several JUNO nominations.