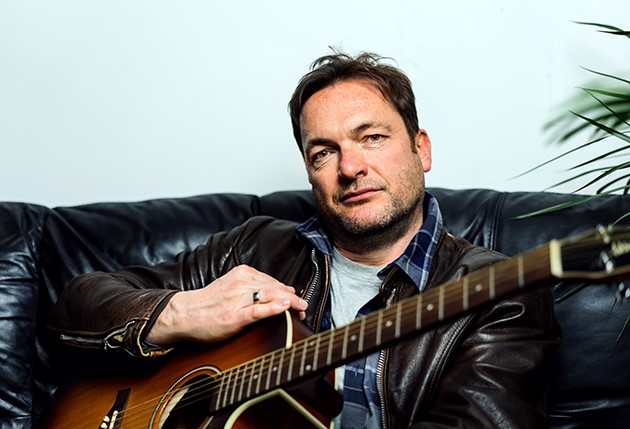 Rife with Ronald’s signature sound and Songwriter of the Year-nominated lyricism, the song serves as the first preview for the Vancouver-based artist’s forthcoming emotionally expansive album, Light & Dark (Borealis Records).

Leaning slightly towards a more rootsy sound, powerful vocals and musicianship across the board (guitar, harmonica, and ukulele) offer a well-rounded folk-Americana, roots-rock release that landed just where Ronald — and his long-time collaborator: award-winning, Platinum-selling and chart-topping producer, engineer, songwriter and multi-instrumentalist John MacArthur Ellis — set their sonic sights a few years ago.

“After showcasing at Americanafest in Nashville in 2018 — and really soaking up the vibe of the Americana music scene down there — John and I knew which direction to take this next album,” Ronald recalls. “Where my most recent album, Fragments, was more on the folk-side of Americana, Light & Dark has more of a contemporary roots sound.

“The track listing includes a few rewrites of songs that originally appeared on some of my early demo albums,” he continues. “There are also more recent compositions, including ‘Old Lover,’ which was co-written with my brother shortly after the first COVID-19 lockdown.”

Beyond “Old Lover,” the pandemic played a larger role in shaping the terrain for Light & Dark — from lyrical nuances, to navigating strict restrictions for recording, to the untimely passing of Ronald’s father within it.

“Songs like ‘Please Don’t Come For Me Now’ and ‘Bones’ took on a particularly new poignancy for me,” Ronald shares of the previous year’s series of circumstances. “As the title suggests, the album’s track sequence intentionally alternates between dark and light moods and themes…

“There’s a bit of an emotional rollercoaster ride.”

The collaborative contributions didn’t end there; for the environmentally-themed song “Still Turning,” Ronald increasingly wanted more people singing the chorus to give the impression of a growing movement. “To do so, and to add a youthful touch, I had my children, who were 12 and 14 at the time of recording, join in for the final rousing chorus.”

Chris Ronald has four previous album releases, including Pacific Time (2004), Turning Tides (2011), Timeline (2014), and Fragments (2017). He was nominated for Songwriter of the Year at the 2014 Canadian Folk Music Awards, achieved Top 10 artist, song, and album ranking on The Folk Charts, and tours internationally — including annual showcases at the Americana and Folk Alliance music conferences.

“City Girl” is available now, with his next single ‘I Won’t Change’ — a melancholy take on the fallout of unrealistic expectations — set to drop April 28, and can be pre-saved on Spotify or pre-added on Apple Music on April 21, 2021. Light & Dark is available for streaming and digital download on May 26, 2021. Physical copies will be available on May 28, 2021.