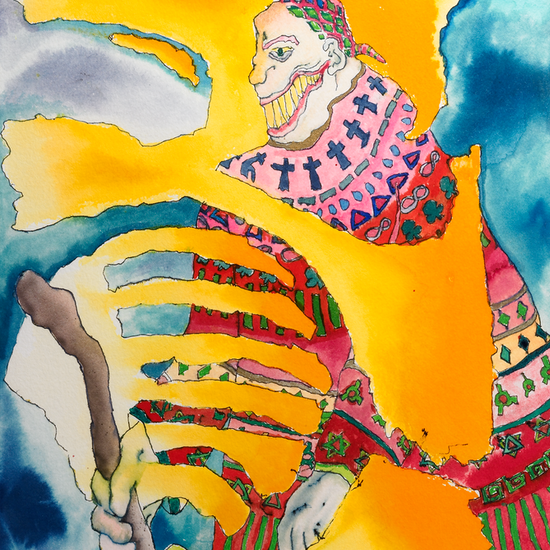 Mission-based Jerry Garcia Music Arts has partnered with the fellow ecologically attuned Aerial platform to release a rare Jerry Garcia digital artwork, “Gift,” on the SuperRare platform. The piece will be available as a non-fungible token (NFT) on May 5. Garcia’s “Gift” will be an authentic, one-of-a-kind piece.

The environmental element of the art release will use the carbon offset tools made available by Aerial, an ecologically driven platform focused on alleviating humanity’s carbon footprint. This particular release will support Aerial’s forest conservation work, verified by the American Carbon Registry and Climate Action Reserve.

Jerry Garcia, best known as the lead guitarist and vocalist of the Grateful Dead, considered himself “an artist who played music.” The visionary Garcia began creating art as a young child and later studied formally at the San Francisco Art Institute. The many mediums Garcia chose to create with — oils, watercolor, ink and digital — were as versatile as his talents. Garcia’s fine art has traveled throughout the United States and the world in multiple exhibitions. In 2014, several of the virtuoso’s fine art pieces were displayed and eventually donated to the “Art in Pop” museum exhibition at the Centre National d’Art Contemporain Le Magasin in Grenoble, France. In January 2015, the Jerry Garcia Foundation launched an ongoing charity arts program to support environmental, artistic and humanitarian causes.

“I think my father would have loved the concept of NFTs, especially with the carbon offset component. After seeing how this new space is empowering artists and creators around the world to make a living doing what they love, I’m excited and honored to help bring his original art into this new era of art history and share it with a new generation of creatives. My father was a pioneer in so many ways and likely one of the first musicians creating digital art in the late eighties to early nineties,” said Keelin Garcia, Jerry’s youngest daughter.

A charitable component of the project will support the preservation of the planet’s coral reefs, a cause Garcia championed in his lifetime. Garcia frequently traveled with his family to the Hawaiian Islands, where he developed a love for scuba diving among the coral reefs, often referred to as the “rainforests of the sea.”

Collections of Garcia’s visual art can be viewed online at Rolling Stone and the Garcia Weir Gallery.

For more information about “Gift,” please visit the SuperRare website.