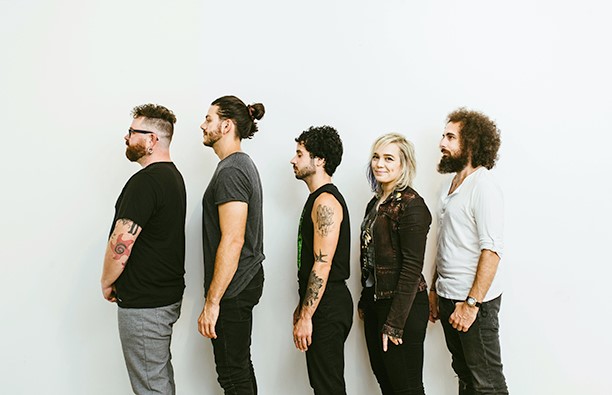 Welland, ON five-piece The Mandevilles deliver a rollicking rocker of a shanty all their own in this, their new single “Fading Colors in the Northern Lights” — available now.

“Lyrically, it’s a bit ambiguous,” lead vocalist Serena Pryne nods, “but I love songs that leave room for the listener to make up their own minds about the story.

“For me, the song is about learning to let things roll off your back, and tuning out the bull****. It’s about letting go of senselessness, and of things that hurt your focus — like having the same argument over and over with someone.

“The main melody fell into my head when we were loading out after a show one night,” she recalls. “I sang it to myself for a few days; ‘something something morning light’… It finally came together in a session a couple of weeks later, and the words ‘Northern Lights’ just rolled off the tongue perfectly.”

“‘Fading Colors in the Northern Lights’ is our interpretation of a sea shanty,” the band — Pryne plus guitarist Nick Lesyk, synth/guitarist Taylor Laslo, bassist Dan Risi, and drummer Brett Bendo — add. “We were plowing through the rum and channelling that epic scene in the Goonies when Captain One Eyed Wily’s ship is freed back into the ocean…

“We went hard with hand claps, and kicked the **** out of a homemade stomp box.”

Beyond that, The Mandevilles layered ‘guitarmonies’ to give this song its dark, pulsating rhythm, with especially triumphant guitar styling in the bridge and outro. “Sonically, Nick was mimicking what a horn section might do to break the tension that builds through the whole song,” the band explains. “Think: Biffy Clyro, or Big Country.”

“Fading Colors in the Northern Lights” follows this year’s previous single, “Lightning,” as well as 2020’s trifecta of offerings, “Borne On The FM Waves Of The Heart,” “You Feel Like Nothing,” and “Junkie.” In addition to contributing to their more than 330,000+ stream stack across Spotify, the new song is also a preview of the tenured band’s forthcoming third album release.

“It’s been more than five years since the release of our last record,” The Mandevilles share, citing their 2014 sophomore LP, Windows and Stones; their 13-track debut, Goodnight Golden Sun, was released in 2012.

“The songs on this record have been in the making for the better part of two years,” they reveal. “We took our time because we wanted to; the writing, recording, and production process has never felt so natural.

“We cultivated such an amazing working and personal friendship with our co-producer, Neil Morrissey, and his former bandmate, Ryan Defoe, during that time as well; Neil and Ryan’s style of writing and arrangement was very similar to ours, so it was an instant connection.

“The record features a lot of experimentation,” they continue. “We got to stretch our repertoire out, and really get to use everyone’s abilities in a way we haven’t before. The songs really came to life because nobody knew what was about to happen.

“You’ll hear a difference — but know that everything you hear was thought of, and is there because we wanted it to be.”

“Fading Colors in the Northern Lights” is available now.