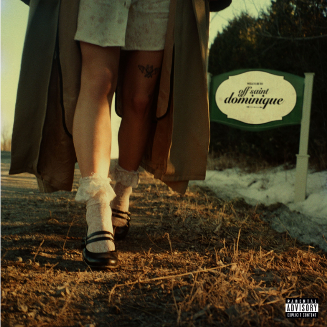 Emerging singer-songwriter renforshort releases her highly-anticipated sophomore EP off saint dominique today. The 6-track EP is a collection of deeply reflective and snappy tracks that range from acoustic pop to alt-rock to pop-punk.

Finding inspiration in cinematic horror and Stranger Things, there’s a darker, more mature edge to off saint dominique. “Sonically there’s inspiration everywhere from hyperpop, to grunge to even almost Disney vibes,” renforshort says. “But it fits together pretty well.”

ren’s multi-faceted artistry is showcased throughout the EP, where no two songs are alike. From the gritty “virtual reality,” to the second single off the project, “exception” an atmospheric and tender lullaby. Another quieter moment from the EP, “this is just a story” is a sweeping, string-plucked opus that pays homage to the exhaustion of isolation through renforshort’s hymnal vocals. As renforshort’s only piano song, “lust to love” is a timeless track about the crushing feeling of unrequited love. With “wannabe,” renforshort crafts the ultimate poppy kiss-off as she calls out a partner who changes their personality depending on who they’re around. And of course, the bombastic pop-punk anthem “fall apart,” featuring fellow rising star glaive, renforshort’s fiery vocals are complimented by a striking guitar rift, which also mark the ren’s first production nod.

The news follows an incredible 2021 for ren, where she has already been crowned an Apple Up Next Artist (Canada), Vevo DSCVR artist, YouTube Trending Artist on the Rise, and the first artist selected as part of Samsung Music Galaxy Thursday spotlight series.