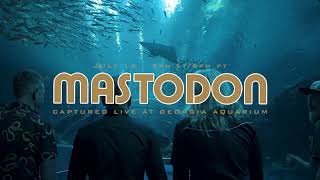 Mastodon team up with DREAMSTAGE to present a completely unprecedented live performance set for July 15, at 9PM EDT. The GRAMMY award-winning rock band along with the pioneering HD live streaming platform DREAMSTAGE, is thrilled to announce Captured Live At Georgia Aquarium, a unique live Mastodon experience in a rare, intimate setting from their hometown of Atlanta, Georgia like you’ve never heard them before. In addition, the program will include exclusive commentary from the band offering an inside view into their creative process.  Click here for tickets and further information.

Now in their 21st year the hard rock quartet are one of the most legendary active live acts around. Captured Live At Georgia Aquarium will bring that passion and power pouring out of your home speakers, as the band performs acoustic for the first… and perhaps last time, from the Georgia Aquarium in their hometown. Tickets on sale now. Along with bundle merch packages, with $1 from each T-shirt bundle package going to support the Georgia Aquarium.

Fresh off the release of their Medium Rarities collection, along with “Rufus Lives” off the Bill & Ted Face The Music (Original Motion Picture Soundtrack) last autumn, plus the hard-hitting “Forged By Neron” – the lead single for DARK KNIGHTS: DEATH METAL Soundtrack (DC Comics) – out tomorrow, Mastodon provide a career-spanning special performance event.