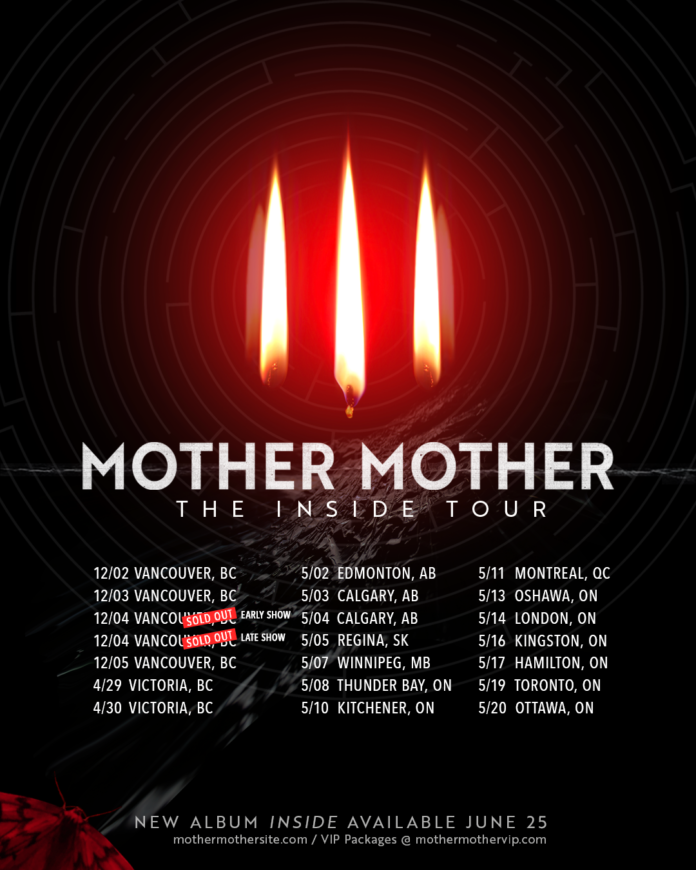 Today, chart topping alt-rockers Mother Mother have released their hotly anticipated new album INSIDE. To celebrate the release, the band joined fans last night to premiere the video for their new single “Sick of the Silence,” which can be seen here. This follows up on their stunning debut of that song on The Late Late Show with James Corden, which fans can click here to watch now. INSIDE is Mother Mother’s first release with Warner Music Canada and is available everywhere now.

Of INSIDE, Ryan Guldemond says “It’s always a bit surreal and a little scary putting songs out into the world after the long and hidden process of making an album. Inside was written in the time of Covid, a unique time for us all, and directly embodies themes surrounding isolation and hope. As we start to emerge out the other side of this thing, it feels cathartic to share this particular body of work with the world. We hope that our fans find the same peace, healing and joy in listening to these songs as we did while creating them.”

With the release of INSIDE, Mother Mother have also announced their return to the stage in Canada in 2022. The dates see the band perform multiple shows in Victoria and Calgary, along with a stop at Toronto’s iconic Massey Hall. Due to popular demand, the group have also added an impressive fifth show to their Vancouver run of dates. These shows follow the international tour the group announced earlier this year, which was extended by adding new dates and upgrading venues in several major markets due to popular demand. In unprecedented fashion, shows on multiple continents have sold out over seven months prior to launch.

Guldemond says, “We’re so excited to tour in our beloved homeland of Canada, the place where we learned how to be a band. These new songs are so dear to us, and we can’t wait to share them in the way we love most: playing live. We have infinite gratitude for our fans and everyone who’s supported us by attending our shows over the years. We don’t take a moment on stage for granted, especially after this long hiatus we’ve all endured from the magic that is the concert experience. Long live live music!”

INSIDE was heralded by the infectious, instantly hummable lead single “I Got Love,” which quickly climbed to the #1 spot on the Canadian radio charts where it remained for a combined six weeks, while garnering over 6 million streams to date. The band quickly followed with “Stay Behind,” “Forgotten Souls” and “Pure Love,” which have cumulatively eclipsed 12 million streams in the leadup to the album’s arrival.

MOTHER MOTHER, comprised of Ryan Guldemond, Molly Guldemond, Jasmin Parkin, Ali Siadat and Mike Young, has had a whirlwind decade; over 1.3 billion streams and views, more than 15 million monthly listeners and counting on digital platforms and 3.1 million Shazam searches. The band had a recent feature in Rolling Stone, and made several appearances of late in Billboard’s Emerging Artist Chart, as well as topping Lyric Find’s global and US lyric search charts. In their native Canada, MOTHER MOTHER has had many top 10 singles on the alternative radio charts, including #1’s for weeks on end and the crown of most airplay for any alternative act at radio for multiple years running. Globally, the band’s avid fanbase continues to grow exponentially, as their presence on TikTok organically exploded during the fall of 2020 during lockdown. A variety of songs from O My Heart and Touch Up were used virally on the platform over 325 million times, resulting in millions of streams and new followers on streaming platforms and socials.

INSIDE Track list:
Seven
Two
Sick of the Silence
Forgotten Souls
Pure Love
Weep
I Got Love
Stay Behind
The Knack
Girl Alone
Like a Child
Breathe
Until it Doesn’t Hurt
Inside