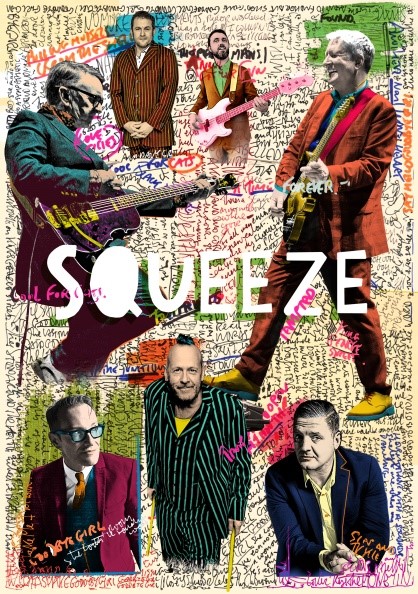 Legendary and eternally hipster U.K. band Squeeze (whose founding members Chris Difford and Glenn Tilbrook have been compared to the likes of John Lennon and Paul McCartney as songwriters and performers), are set to begin the U.S. leg of their 24-date Nomadband tour on August 1st . The group’s headlining schedule will be interspersed with 18 support dates for Daryl Hall & John Oates and will continue throughout the summer into early fall 2021.

Squeeze will begin their Nomadband tour at Nashville’s historic Ryman Auditorium before joining Hall & Oates for their first date on August 5 at the Xfinity Center in Mansfield, MA (with KT Tunstall.) The band’s final headlining show in the U.S. will be on October 7th at the Moda Center in Portland, OR.

Squeeze’s debut self-titled album was released by A&M in 1978 (after a three-song EP) at the height of the punk revolution, but its pop songwriting hooks and melodies hark back to the ‘60s British Invasion. That album included the track, “Take Me I’m Yours,” followed by a cadre of hits on the UK charts including “Cool for Cats,” “Up the Junction,” “Pulling Mussels From A Shell,” “Black Coffee in Bed” and “Labeled With Love.” Squeeze’s hits “Tempted,” “Hourglass” and “853-5937” (from East Side Story) made their mark in the U.S. in 1981.

Squeeze disbanded in 1999 and reunited in 2007, releasing three new albums since then (2010’s Spot the Difference, 2015’s Cradle to the Grave and 2017’s The Knowledge,) as well as various solo projects from both Chris and Glenn. Aside from Difford and Tilbrook, Squeeze now features keyboardist Stephen Lange and drummer Simon Hanson (since 2007,) percussionist/back-up singer Steve Smith (vocalist for house music group Dirty Vegas) along with pedal/lap steel guitarist Melvin Duffy (who joined them for the 2019 tour) and Owen Biddle, former bassist for The Roots.

The band’s “Squeeze Songbook 2019” tour featured opening acts like KT Tunstall, They Might Be Giants, X, Marshall Crenshaw, the Mavericks and Leon Tilbrook in selected cities and was widely praised by critics. Two-time Rock and Roll Hall of Fame Foo Fighters founder Dave Grohl even joined the band at the Bourbon & Beyond Festival in Louisville in September 2019 to perform percussion on “Black Coffee in Bed.”