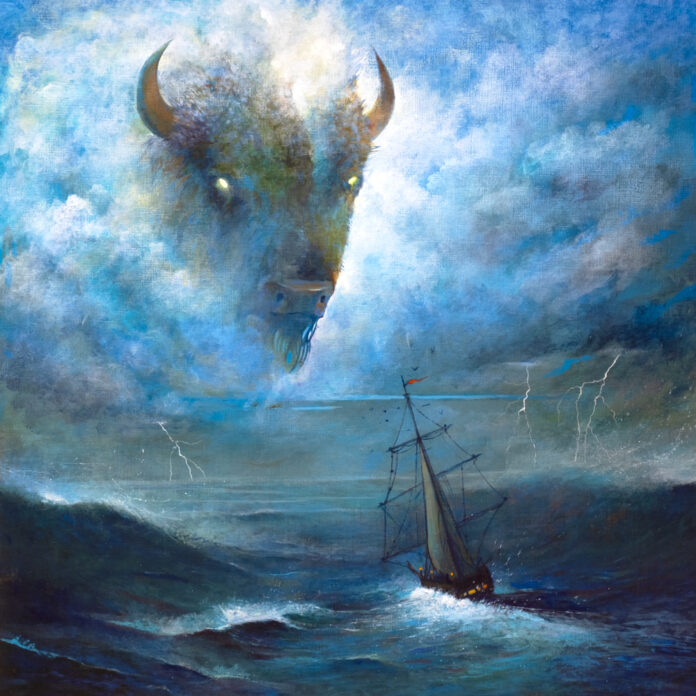 “White Buffalo” arrives as a symbol of aspiration, in recognition of the resilience and strength of Indigenous communities to overcome injustice while manifesting a prosperous future. The big guitars, stomping baseline and pummeling drums barrel forward as if to conjure the movement of a giant buffalo.

“White Buffalo is the third instalment in our trilogy of songs about Indigenous rights,” says Crown Lands. “Mountain” is what happened. “End of the Road” is what is happening. White Buffalo is manifesting what will happen: overcoming oppression and rising up to reclaim one’s land. The White Buffalo is a symbol of manifestation. When Colonizers came to North America they tried to wipe out the Buffalo to starve Indigenous people to death. The buffalo are still here. We are too, and together we’ll overcome. Also, never has 7/8 ever been more danceable.”

“White Buffalo” is released today with the accompanying official music video, directed by Alim Sabir. The spirited visual sees Crown Lands immersed in the elements, performing in a new age forest with dancers that fortify the theme of movement.

Over the course of a thirteen-minute, multi-part composition, “The Oracle,” continues another story that Crown Lands is creating, revealing the origins of the Queen character featured in the “Context: Fearless Pt. 1” music video. “We wanted to take the listener somewhere and evoke a sense of adventure,” says Bowles. Taking solace from the realities Crown Lands confront in a fictional world they continue to create.

Crown Lands were introduced to Grammy Award-winning producer David Bottrill after he produced the vocals for the band’s last release, “Context: Fearless Pt. 1.” Comeau recalls, “The riff for ‘White Buffalo’ came to me during the Context / Right Way Back session with Nick Raskulinecz back in February 2020. It felt addicting and special then. It was originally written in 13/8 and the chorus was in 7. It kept popping its head up in jam sessions, but we weren’t sure how to make the chorus work. Enter David Bottrill.” On working with the esteemed producer, Comeau continues, “Dave is one of the most meticulous and detail-oriented people we’ve worked with. His precision helped make these songs exactly what they needed to be.”

Fans now have a chance to experience a Crown Lands live set up-close-and-personal as the band announce a hometown show on December 1, 2021 at the Axis Club (Formally The Mod Club) in Toronto. Tickets are available now on Ticketmaster.