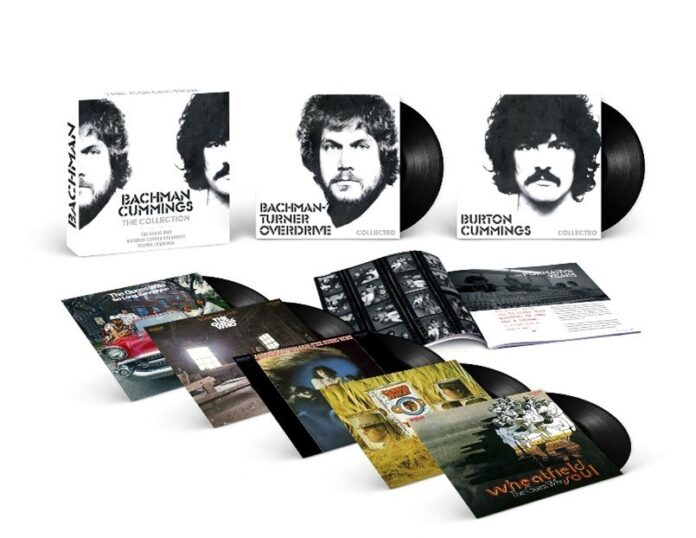 Randy Bachman and Burton Cummings are getting ready to launch The Collection, a special edition box set from Guess Who bandmates. The illustrious box set from two of Canada’s most celebrated musicians and songwriters includes five albums from The Guess Who from their 1969 – 1971 period alongside material from both Bachman-Turner Overdrive and Burton Cummings. This 7CD or 7LP set will include and expanded booklet of rare and unpublished publicity, studio and master tape photography and detailed liner notes. Both LP and CD boxes are available for pre-order now.

Bachman and Cummings rose to international fame as members of supergroup The Guess Who. Bachman broke with the band in 1970, forming Bachman-Turner Overdrive. Cummings departed in 1975 for a solo career. The Guess Who laid the groundwork for Canada’s breakthrough songwriting partnership in Randy Bachman and Burton Cummings, as the first three albums of the Bachman Cummings Collection – Wheatfield Soul and Canned Wheat, both released in 1969 – and 1970’s American Woman – attest. The Guess Who’s trailblazing run of U.S. chart and sales successes continued with the albums Share The Land and So Long, Bannatyne. With Toronto-born Jack Richardson working his magic in producing Bachman-Cummings’ hook-filled gems for instant radio appeal, The Guess Who became Canada’s first rock star collective.

As songwriters, there was chemistry: from the moment Burton Cummings sat down at the piano with Randy Bachman “Burton and I would get together every Saturday morning at 10 or 11 a.m. and I would play him ideas I had for songs,” Bachman recalls. “We wrote very quickly. No song was a labour. If it didn’t work, we threw it away.”

Often using Beatles or Chuck Berry songs as starting points, the duo employed a healthy rivalry. “The competition between us made us a pretty good songwriting team. We were force-fed many musical styles and that crept into our work,” adds Cummings.

Whether collaborating or through the individual endeavours Randy Bachman like Bachman-Turner Overdrive or Burton Cummings’ collected work, the body of songwriting is arguably among the best of rock n’ roll history.

Of the legacy, Cummings says, “I’ve lived a pretty full life. I’ve been all over the world. And I’ve realized, better than ever, every year that I go out and sing those songs again, it’s more special to the audience, besides being more special to me”.
Bachman adds, “These songs are bigger than us or any differences that we might have had in the past. Getting together to celebrate the songs is a real triumph for us”.

Bachman Cummings The Collection will be released internationally on October 29, 2021.

The Guess Who – Wheatfield Soul

The Guess Who – American Woman

Side B
969 (The Oldest Man)
When Friends Fall Out
8:15
Proper Stranger
Humpty’s Blues / American Woman (Epilogue)

The Guess Who – So Long, Bannatyne

Side B
Grey Day
Life In the Bloodstream
One Man Army
Sour Suite
So Long, Bannatyne

Side A
Hold Back The Water
Stayed Awake All Night
Let It Ride
Takin’ Care Of Business
Rock Is My Life, And This Is My Song

Side B
You Ain’t Seen Nothing Yet
Four Wheel Drive
Hey You
Lookin’ Out For #1
Down, Down
The Guess Who – Canned Wheat