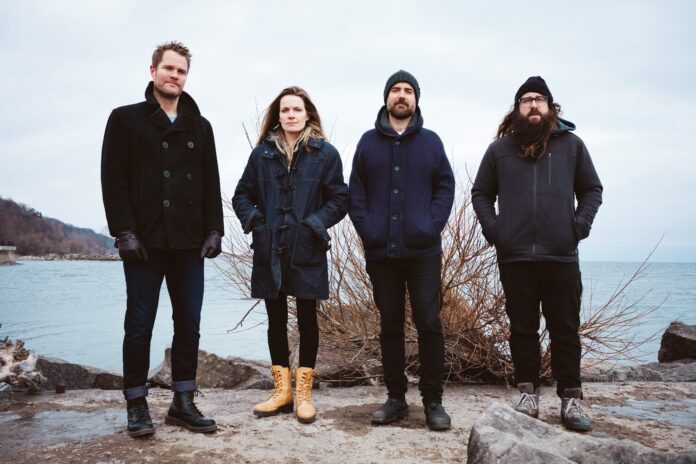 Today, Toronto band, The Wilderness of Manitoba, release their first single, The Alchemist. The song marks the end of the group’s three-year hiatus and the lead single from their forthcoming new album, Farewell To Cathedral, out October 29 (Popguru Sound & Vision).

Singer/multi-instrumentalist and founder, Will Whitwham, says on the group characterizing themselves as an evolving entity: “I’ve always been a believer in fresh collaborations because everyone you meet influences your creative process in some way. It’s up to you to decide whether they fuel it or stagnate it. In this particular case, the four of us together was the best fit for the current batch of songs.”

For the band, recording the whole album over a mere two days at Revolution Recording in Toronto was completely unprecedented. In the past, Whitwham felt he laboured over a lot of the sonic details, adding overdub after overdub. But for this album, the songs were captured at their most live and purest stage. The results show that, at the end of the day, the quality of the songs is not necessarily contingent on the recording process. See the full track list below.

The lead single, The Alchemist, was produced by Graham Stairs and written about the turn of seasons and the elusiveness of time as it passes. Whitwham says on the track, “It is a song about reflecting upon what one had. The alchemist himself (as the character suggests) is uncertain of whether he can even make silver, let alone gold. There is worry even in hopefulness. He is still drawn to his muse even though she appears to have left as he tries to find her or pieces of her in the sacredness of nature because that’s the closest he feels he can get to her. Lost in dreams and buried in his own sea of thoughts, he seeks to immortalize her memory and spirit.”

On the accompanying seasonally and resonate visuals, also conceived, filmed and edited by Whitwham, he adds, “The Alchemist was filmed in an attempt to depict all four seasons. The video is a snapshot of how I was dealing with and living throughout isolation. Capturing and spending time in nature can be healing in both the best and worst of times. It is also the visual vehicle for illustrating the song’s journey in its ‘passing of time’ over a year.”

In its twelve-year existence, the Wilderness of Manitoba’s strengths come as a direct result of the wealth of traveling and playing the group has done. They have played the End of the Road Festival and Peter Gabriel’s WOMAD Festival in the UK and toured the UK, US, Netherlands, Canada and Germany with such artists as Aimee Mann, Lord Huron and Other Lives among others. “The live show,” says Whitwham, “is an in-the-moment portrait of the band and its efforts.” Those efforts were recognized when the Wilderness of Manitoba was nominated for a JUNO and two Canadian Folk Music Awards. Summing things up, Whitwham says, “My eventual hope is that we are able to embark on a proper live tour of the Farewell To Cathedral album in 2021 or 2022 after the much more serious matter of taking care of each other and ourselves as we move out of the pandemic.”

Stay tuned for more from The Wilderness of Manitoba as the story of Farewell To Cathedral unfolds this fall.

Farewell To Cathedral Track List:
1. Oblivion
2. The Well Has Run Dry
3. Sometimes
4. The Alchemist
5. Send Me To The Fire
6. The Ghost Of Abilene
7. Always (Violet Hour)
8. In An Honest Way
9. Lost In Her Ocean
10. Furious Seasons