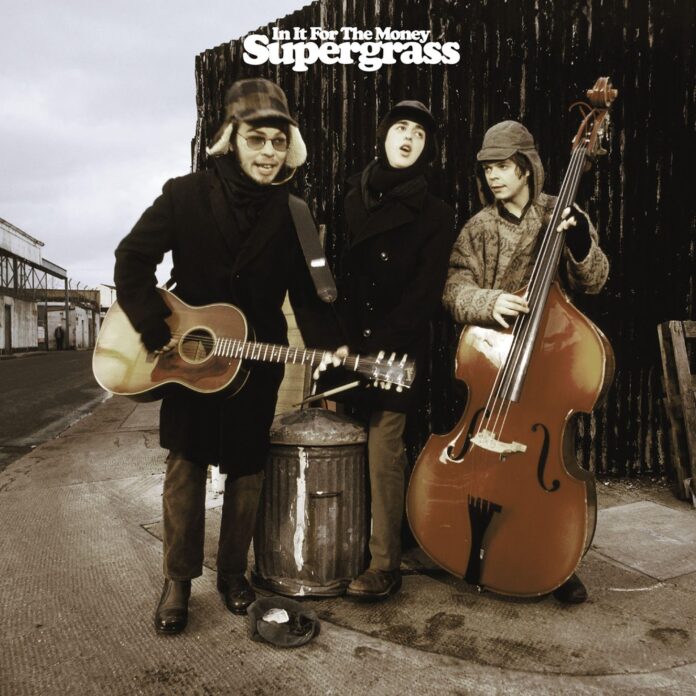 Supergrass today announce details of the remastered expanded version of their beloved, classic second album In It For The Money. The 3CD, 2 x 2LP and Digital Formats will be released on August 27, 2021 on BMG, which sees the album available on vinyl for the first time since its original release in 1997. Preorder here. The announcement is accompanied by a previously unreleased early version of ‘It’s Not Me’.

Originally released on April 21, 1997 to a hail of critical and commercial acclaim, In It For The Money saw Supergrass reach #2 in Album Charts, passing platinum status in the UK and selling over a million copies worldwide. It was voted in the NME‘s top 10 Albums of 1997 and included in Robert Dimery’s ‘1001 Albums You Must Hear Before You Die’. Shedding their skin as the jolly japey kids we met on archetypal teenage debut I Should Coco, In It For The Money was dark, perverse and bristling with barely-repressed anger. It is the sound of Supergrass creating a world that was at once reassuringly normal and exhilaratingly weird. To crystallize this bold and assured step on from their debut, with In It For The Money the band were now producing themselves, (albeit with the aid of simpatico engineer/ co-producers in the form of John Cornfield and Sam Williams), and had welcomed in Gaz’s keyboard-playing brother Rob as a fully contributing member of the band.

This brand new expanded edition of In It For The Money features remastered audio from analogue tape on 180g Black and 140g Turquoise Vinyl. The LP also includes 12” single ‘Sun Hits The Sky (Bentley Rhythm Ace Remix)’ / ‘The Animal’ on 140g White Vinyl. The album hasn’t been available on LP since its original release in 1997. The 3CD format includes 43 tracks over two CDs of B- Sides, Rarities, Outtakes & Live Tracks, many of which are previously unreleased, imagery from revered photographer Kevin Westenberg, and sleevenotes from Charles Shaar Murray. The album has been remastered by Supergrass and all formats have been compiled by them.

Reuniting in 2019 after more than a decade apart, Supergrass once again witnessed success with “The Strange Ones 1994-2008” career spanning Deluxe Boxset and a sold out world tour. Formed in Oxford UK in 1993, the Brit, Q, NME and Ivor Novello-winning outfit released their Mercury-nominated No.1 debut album I Should Coco in 1995. Fourth single, ‘Alright’, was a pop masterpiece and became a massive hit, catapulting the band to global success. Supergrass subsequently released another five acclaimed studio albums: In It For The Money (1997), Supergrass (1999), Life On Other Planets (2002), Road To Rouen (2005), Diamond Hoo Ha (2008) as well as top 5 best of, Supergrass Is 10 (2004). Other top 20 singles include: ‘Lenny’, ‘Going Out’, ‘Richard III’, ‘Sun Hits The Sky’, ‘Pumping On Your Stereo’, ‘Moving’ and ‘Grace’. They scored an unbroken run of five Top 10 albums, among them three platinum sellers generating millions of worldwide sales spawning ten Top 20 singles, and scored the biggest-selling debut for Parlophone since The Beatles. Supergrass split in 2010, though the band members went on to lead successful solo careers: Gaz Coombes released solo albums Here Come The Bombs in 2012, Matador in 2015 and World’s Strongest Man in 2018; Mick Quinn has been playing with his own group, DB Band, and been a member of Swervedriver since 2015, Danny Goffey has released solo material including album Schtick in 2018. Ten years to the day since they split, Supergrass appeared on stage at Glastonbury Pilton Party 2019, in a secret special guest slot to announce their return. A string of 5 star reviews greeted their subsequent worldwide reunion tour, culminating in two sold-out nights at London’s Alexandra Palace.