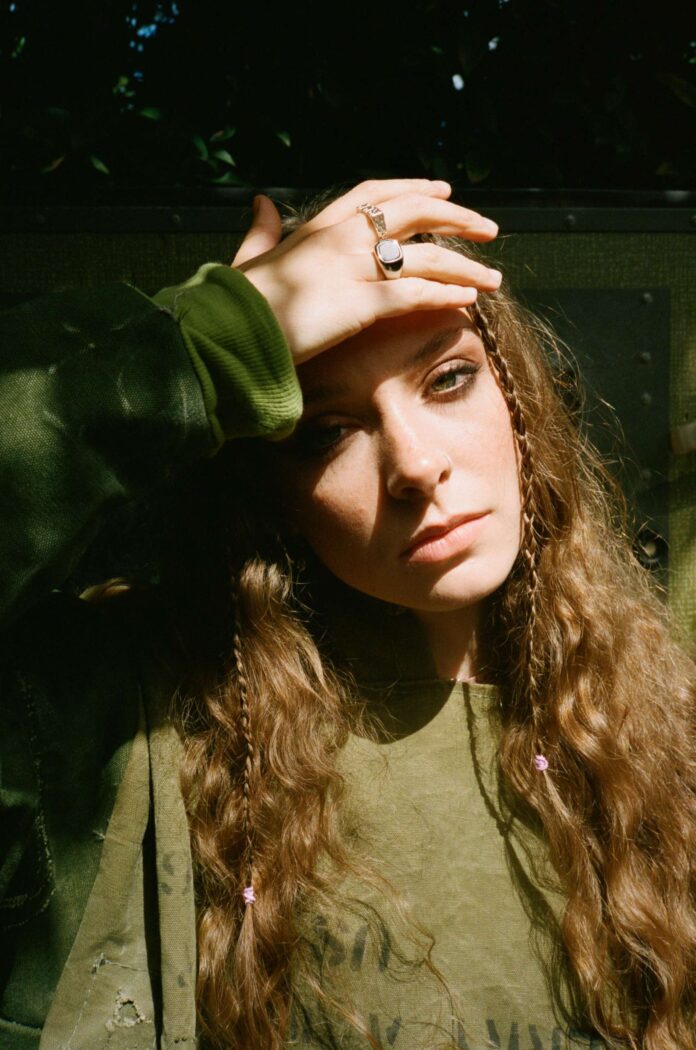 Today, breakthrough artist of 2021 and the Ivor Novello Rising Star nominee Holly Humberstone announces her highly anticipated second EP The Walls Are Way Too Thin, set to be released on 5 November on Polydor/Darkroom/Interscope/Universal Music Canada, the country’s leading music company. Featuring the landmark A-List title track and the immaculately beautiful ‘Haunted House’, the six-track EP includes brand new song ‘Please Don’t Leave Just Yet’, a collaboration with Matty Healy, frontman of one of Holly’s favourite bands The 1975. When Holly Humberstone entered the studio with Matty, it was mid-pandemic and the 21-year-old felt a yearning for human connection. She pictured drifting out to sea with the city lights behind her, feeling lost and rudderless. Matty, Holly and longtime collaborator Rob Milton, put these universal feelings into the song, another example of Holly’s exquisite ability to connect with our deepest, darkest emotions.

In Holly’s own words: “The song is about wanting someone to stay so badly, even if only for five more minutes, because you know how much it’ll hurt when they leave. I think the desperation in the words really sums up how I was feeling at the time and how so many people must’ve been feeling last year when we were all completely starved of human connection! I often write songs with a bit of a visual in my head, and I kept picturing solitary places, like drifting far out to sea, so far that you can’t find a way back, or old deserted cargo shipping yards with all the lights at the edge of the city.

Holly’s second EP The Walls Are Way Too Thin follows her critically acclaimed debut Falling Asleep At The Wheel, which marked the first chapter in the story of a new global talent. Having just been announced as the Ivor Novello Rising Star Nominee, to being named the BBC Sound of 2021, Apple’s Up Next Artist, VEVO DSCVR’s Artists To Watch 2021, and internationally heralded by the likes of Jimmy Kimmel, James Corden, Triple J, The Sunday Times, NME (5*), The Guardian, i-D, ELLE, and Billboard, it is Holly’s remarkable storytelling that has captured the hearts and minds of fans globally. Holly wants her lyrics to be the ones people could tattoo on themselves and her songs embrace and translate some of life’s most intense feelings in a way that typical conversations all too often fail to capture, from mental health struggles to the dizzying feelings of displacement as you grow out of adolescence.

“This EP represents a feeling of being lost. It’s the kind of lost that makes you question who you are and where you belong. So lost that someone might need to find you again because you can’t find yourself. That’s how it felt to move to Liverpool, then London, and be in transit between cities and never settling” – says Holly.

The news comes after the long awaited return of live music, with Holly playing to her fans for the first time ever, stating “I’ve never seen physical proof my fans actually exist” (Metro). The 21-year old became the breakthrough artist of an unprecedented year – whilst her streaming numbers rocketed to over 150M global streams and her story grew from her crumbling house in Grantham – Holly was unable to play for her growing fanbase. Now, having set festival stages alight at Latitude, Standon Calling and Tramlines, Holly prepares for her first sold out London headlines, with four shows at Omeara next week.

Creating a visionary world within her music, Holly has also set up the Fifth Sister Swap initiative, as a way for her and her fans to swap clothes without relying on fast fashion. It’s an idea that stemmed from her three sisters constantly borrowing from and swapping their own wardrobes, and growing up in a house of women has made Holly passionate about issues affecting women. The artist recently filmed a session for Splendour In The Grass Festival in the Mind Charity shop in Camden, with the focus being on the incredible work Mind do in the UK for mental health, an issue close to her heart. Wanting to bring her initiatives directly to her fans, Holly will be launching the first IRL Fifth Sister Swap at her sold-out Omeara headlines.