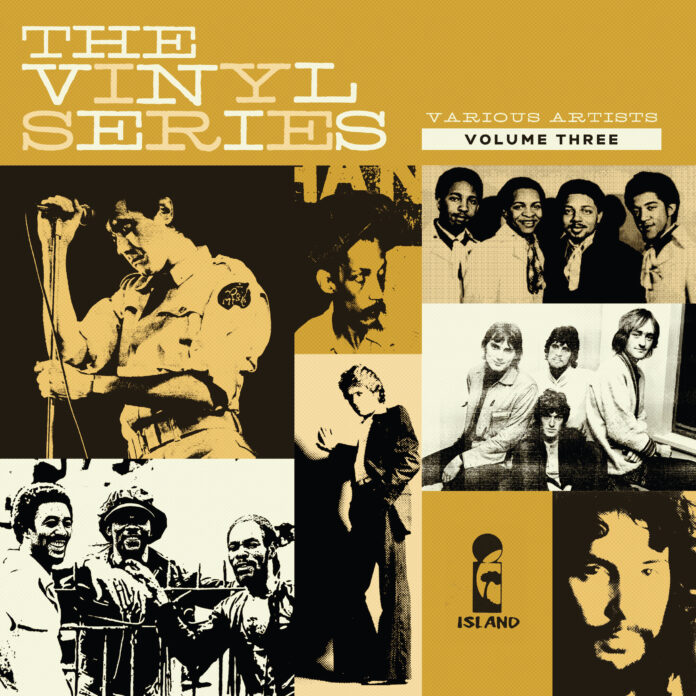 Since its beginnings in Jamaica in 1959, the story of the pioneering Island Records label has been inextricably linked to the story of its founder, Chris Blackwell. Now, Blackwell has curated a series of compilation LPs featuring his hand-picked tracks that correspond with his and Island’s legendary history.

On October 29, Island Records / UMe will release the third volume of The Vinyl Series, an 18-track double LP compiling some of the label’s key releases of the late 1960s and early ’70s. Volume One included pivotal songs from 1962 to 1969, and Volume Two, released over the summer, covered the years 1969 to 1973. Taken together, the sets explore the wide-ranging highlights from Island’s remarkable and extensive catalog. Volume 1 + 2 are available now HERE.  Pre-order The Vinyl Series, Volume 3, or the Volume 1-3 bundle HERE.

“The counterculture, which came to full force in 1967, had coincided with Island’s launch as a label,” writes Blackwell in the new collection’s liner notes, examining the connections that remained strong as the label moved into the evolving world of the ’70s. “Most of the acts we started off with remained with Island…To many of us, there didn’t seem to be much change.”

This volume of The Vinyl Series includes material which remained rooted in the folk and acoustic-based styles that were crucial to Island’s foundation. That side of the label’s history is represented by Nick Drake’s “Way to Blue” (from his first album, Five Leaves Left) and “Late November” by Sandy Denny, which first appeared on a 1971 label sampler. But it was Cat Stevens who was identified most commonly with Island in the U.K.—he “continued to be Island’s biggest seller,” notes Blackwell—and this album contains his 1971 global smash “Morning Has Broken,” an adaptation of a Christian hymn.

But Island had also broken through into enormous success on the harder rock front. Free hit big with the 1970 album Fire and Water, whose title track opens the Volume Three collection. “Incredibly young, but in many ways wise beyond their years,” Blackwell writes, “the four-piece was such a talented group, led at the time I signed them by the 15-year old (!!!) Andy Fraser.”

When Paul Rodgers and Simon Kirke split with Free to form Bad Company, they stayed with Island and became a worldwide sensation; “it seemed like a culmination and justification of their great talents,” writes Blackwell. And prog-rock supergroup Emerson, Lake and Palmer, represented here with their biggest hit single, 1970’s “Lucky Man,” were also “hugely successful on a global scale,” as Blackwell puts it.

Island’s rock roster reached into the world of glam in the early ’70s. Blackwell admits that “When I heard the first Roxy Music album, I confess that I wasn’t immediately certain of it.” But when he fully absorbed the group’s complete sound and vision, he said, “I understood that this was a true artistic endeavor, conceived and executed as such.” Along with Roxy’s magnificent first single, “Virgina Plain,” and lead singer Bryan Ferry’s solo cover of “The In Crowd,” The Vinyl Series: Volume Three also includes Traffic’s “Dear Mr. Fantasy,” and “Better By You, Better Than Me,” by Spooky Tooth, as well as “This Town Ain’t Big Enough for Both of Us,” by the enigmatic duo Sparks, whose unparalleled career was recently the subject of an acclaimed documentary film.

But Chris Blackwell and Island Records will forever be associated with the music of Jamaica, and the period addressed in this album includes two landmark events that changed the world. Blackwell observes that he “began to see [reggae] was also starting to be taken up by some of the same audience who were the fanbase for underground rock.” Though he had released Bob Marley’s first solo single in the UK in 1962, he finally met and signed the Wailers a decade later. “I loved what they recorded in Jamaica for what became the Catch A Fire album,” he writes. “Although initially, it didn’t sell in colossal terms, it was critically a smash.” And it set in motion one of the greatest careers music has ever seen.

Concurrently, Island released the soundtrack for the revolutionary 1972 film The Harder They Come, which introduced reggae to an international audience. This collection includes two classics from that film—”Johnny Too Bad” by the Slickers and Jimmy Cliff, the star of the movie, singing “You Can Get It If You Really Want.” The majestic Toots and the Maytals, heard on this set performing 1974’s “Time Tough,” were also part of the soundtrack, which helped launch them to global prominence. “This Is Reggae Music,” a declarative single by the Jamaican band Zap Pow released in the wake of the soundtrack’s success, is also included.

In track-by-track essays by noted author and longtime Island Records chronicler Chis Salewicz, the album package features reminiscences that offer Rock and Roll Hall of Famer Blackwell’s own perspective. The third volume of The Vinyl Series—which also illustrates the label’s ventures into funk (The Meters), dub (Augustus Pablo), and blue-eyed soul (Robert Palmer)—rounds out the tale of Island’s visionary, eclectic path as it solidified its place as one of the most distinctive and bold labels in music history.

Disc 1 – Side B:1. Zap Pow – This Is Reggae Music2. Toots and the Maytals – Time Tough3. The Slickers – Johnny Too Bad4. Jimmy Cliff – You Can Get It If You Really Want5. Augustus Pablo – King Tubby Meets The Rockers Uptown