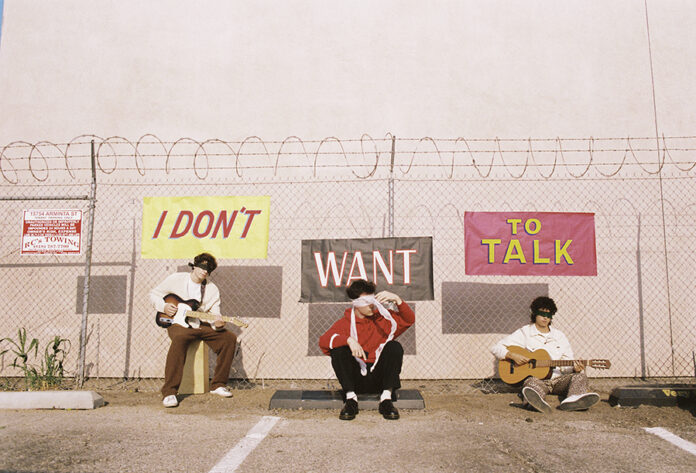 “’I Don’t Want to Talk’ is ultimately a song about insecurities. Not only in yourself, but in this case, particularly in a relationship. It centers around the fear of being away from someone for too long and that ultimately allowing the other person’s head to be turned by someone else, and instead of expressing those fears, completely shutting down and not wanting to talk about it at all,” says Dylan Minnette

Wallows have also announced the first part of their 2022 Tell Me That It’s Over tour which begins in North America on April 1, 2022 in Seattle, WA (see full list of dates below). Tickets and limited VIP packages go on sale Friday, October 8th at 10am local time. Fans who sign up for Wallows newsletter will have first access to tickets and VIP packages via a special pre-sale starting Tuesday, October 5th at 10am local time and running through Thursday, October 7th at 10pm local time (while supplies last).

Wallows, the Los Angeles-based trio of Dylan Minnette, Braeden Lemasters and Cole Preston, released their acclaimed Atlantic Records debut album, Nothing Happens, in 2019. Produced by GRAMMY® Award-winner John Congleton (St. Vincent, Alvvays, Future Islands) who also produced the band’s 2018 EP Spring, the album quickly became one of the most-streamed debut albums by any band in 2019 and features the breakthrough platinum single “Are You Bored Yet? (Feat. Clairo),” which has surpassed 607M global streams. 2020 saw Wallows release “OK,” a song that took on a new meaning during the pandemic, and their quarantine-made EP, Remote, as well as being named MTV’s PUSH Artist of the Month for September. Wallows return in 2021 with brand new single “I Don’t Want to Talk” – a first taste of their collaboration with producer Ariel Rechtshaid (Vampire Weekend, Haim, Adele) that’s been in the works over the past year.

TELL ME THAT IT’S OVER TOUR
NORTH AMERICA PART 1