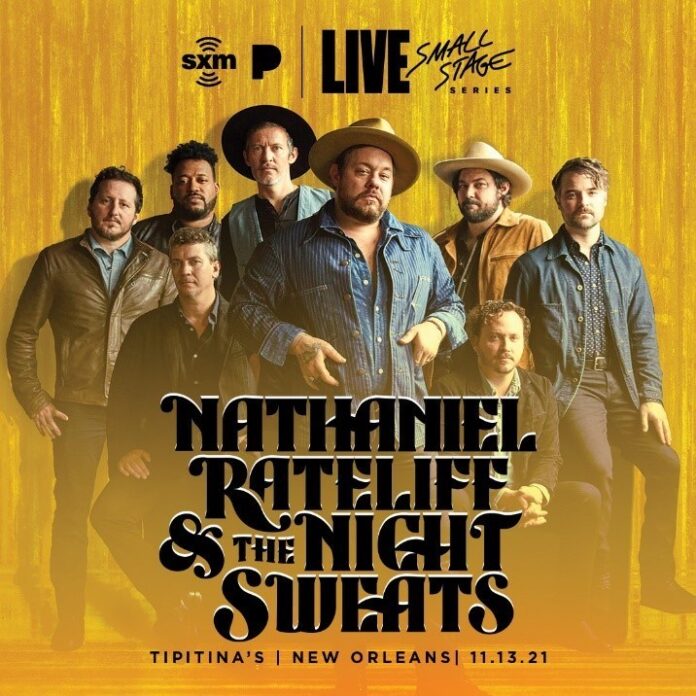 SiriusXM and Pandora announced today that Nathaniel Rateliff & The Night Sweats will perform at one of New Orleans’ best-known clubs and locals’ favorite music venue, Tipitina’s, for SiriusXM and Pandora’s Small Stage Series on Saturday, November 13.

Nathaniel Rateliff & The Night Sweats’ performance for SiriusXM and Pandora comes off the heels of the release of their new album out November 5, The Future, and will feature the band performing songs from the new album as well as fan favorites in an intimate setting.

SiriusXM’s The Spectrum first introduced the world to Nathaniel Rateliff & The Night Sweats in 2015 and will now introduce the world to ‘Night Sweats Radio w/ Nathaniel Rateliff,’ which will debut this Friday, October 22 at 10 a.m. ET on the channel, via satellite and on the SXM App.  The six-episode series will premiere new shows at this time every Friday and be made available on the SXM App immediately after.  Shows will encore on Saturdays at 7 a.m. ET and 9 p.m. ET Mondays at 3 p.m. ET.  Each one-hour show will feature Rateliff as host, with a member of The Night Sweats, sharing hand-picked music and conversation with guests about their new music.

“New Orleans is one of my favorite cities on the planet and Tipitina’s is one of the greatest music venues,” said Rateliff.  “We are excited to play a show there featuring songs from our new record. It is great that everyone will be able to join us and listen live on SiriusXM.”

Nathaniel Rateliff & The Night Sweats’ exclusive ‘Small Stage Series’ performance in New Orleans will air live on The Spectrum (ch. 28) via satellite or on the SXM App November 13 at 10 p.m. ET.  The performance will be rebroadcast multiple times throughout the week.

To maintain the highest public health standards and/or requirements, SiriusXM will adhere to health and safety protocols for the venue, and all state and local health mandates to protect attendees, staff, and artists.

SiriusXM is offering subscribers a chance to win tickets and a trip to New Orleans to see Nathaniel Rateliff & The Night Sweats perform at Tipitina’s on November 13, 2021.  SiriusXM subscribers as of November 5, 2021 can enter here. No Purchase Necessary. U.S. only, must be at least 18+ to enter. Odds of winning depend on the number of eligible entries received. Subject to Official Rules.  Void where prohibited.

SiriusXM’s The Spectrum and ‘Night Sweats Radio w/ Nathaniel Rateliff‘ are available to subscribers in their car and on their phone and connected devices at home with the SXM App. Streaming access is included for most subscribers. Go to www.siriusxm.com/ways-to-listen to learn more.