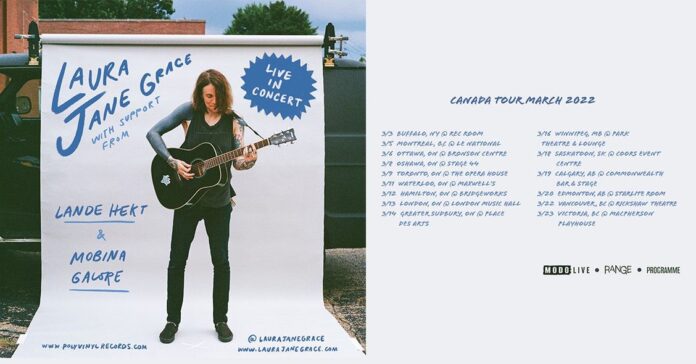 Best known as the founder, lead singer, songwriter and guitarist of the punk rock band Against Me!. Since coming out as transgender in a 2012, she has become an outspoken advocate for transgender awareness.

Joining Laura will be Lande Hekt (Muncie Girls) and Winnipeg’s power duo, Mobina Galore. Laura’s live show will showcase songs from her newest solo EP “At war with the silverfish” along with her deep catalog of punk rock anthems and meaningful songs.

“These are songs of late-night madness and loneliness, orphan songs that came wandering in looking to feed like insects,” Laura Jane Grace says of her new EP. Grace conveys the distinctive pluck that has defined her work with Against Me! and The Devouring Mothers, but with the intimate energy of home recording with an acoustic guitar. The album is not a clarion call, but a tender invitation. It is a necessary capsule of a woman’s artistic pulse; love, longing and loneliness told in affecting turns of phrase.

Come join Laura Jane Grace and see why she is one of today’s most important songwriters and performers.