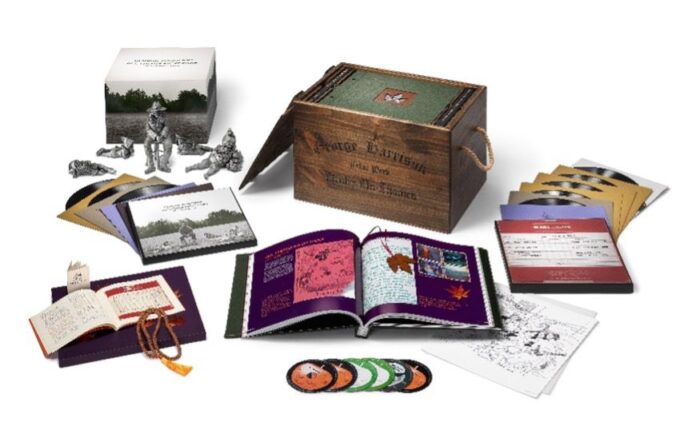 George Harrison’s All Things Must Pass: 50th Anniversary Edition (Capitol/Ume/Universal Music Canada, the country’s leading music company), released in celebration of five decades of the legendary songwriter and musician’s transformational and timeless masterpiece, won the Grammy Award for Best Boxed Or Special Limited Edition Package at the 64th Annual Grammy Awards, Sunday, April 3, 2022. The award was accepted at the ceremony by George’s widow, Olivia Harrison, who collaborated on the artwork and unique packaging with her son, Dhani Harrison, and art director Darren Evans. All Things Must Pass previously received a 1972 Grammy Award nomination for “Album of the Year” while the #1 single, “My Sweet Lord” earned a Grammy nod for “Record of the Year.” The album was inducted into the Grammy Hall of Fame in 2014.

“This is the 50th anniversary of this record and I guess it’s here to stay. It’s here for you, this music is filled with hope and compassion and healing and rock and roll,” said Olivia Harrison. “I want to thank the support of Universal, Paul Hicks for remixing this epic album, David Zonshine, Rachel Cooper, Darren Evans for his design work, but really Dhani Harrison, my son, for the respect and love he’s always showed his father and the attention he’s given to his father’s music and career and legacy.”

Decades in the making and lovingly crafted by the Harrison family, the All Things Must Pass: 50th Anniversary Edition is anchored by a stunning new remix of All Things Must Pass which has been completely remixed from the original tapes, fulfilling George Harrison’s longtime desire. Executive produced by Dhani Harrison, and mixed by triple GRAMMY® Award-winning engineer Paul Hicks (The Beatles, The Rolling Stones, John Lennon), with the product produced by David Zonshine, the new mix transforms the album by sonically upgrading it – making it sound brighter, fuller and better than ever. The expansive collection explores the 1970 album sessions through 47 (42 previously unreleased) demos and outtakes, offering an inside look into the creative process like never before.

Housed in an artisan designed wooden crate, resembling something that may have been dug up from the grounds of the Harrison’s century old family estate, Friar Park, the Uber Deluxe Edition is the ultimate, immersive edition of Harrison’s beloved triple album. The lavish boxed set presents the original album, demos, and outtakes in a variety of formats, including on eight 180-gram LPs, five CDs, and one Blu-Ray disc, which allows one to experience the main album in high-res stereo, enveloping 5.1 surround sound and Dolby Atmos mixes.

The crate boasts an elaborate 96-page scrapbook curated by Olivia Harrison, which includes a wealth of photos and previously unpublished imagery of the recording sessions, memorabilia from the era, handwritten lyrics, diary entries, studio notes, tape box images, a comprehensive track-by-track, and more. The elegantly designed book pays homage to Harrison’s love of gardening and nature with recurring design elements and an organic forest motif throughout and most strikingly with a wooden bookmark made from a felled Oak tree (Quercus Robur) from Friar Park cut in the shape of a maple leaf that matches the cut out on the cover of the book. The book has been made to replicate the look of a personal family scrapbook as it showcases photos as glossy images that pop off the page like the real thing and Harrison’s personal recording artifacts as tactile objects that feel real to the touch. A second 44-page book chronicling the making of All Things Must Pass through extensive archival interviews with richly detailed notes compiled by Don Fleming & Richard Radford, is also included and serves as a listening guide when experienced together with the music.

This truly unique box also contains 1/6 scale replica figurines of Harrison and the gnomes featured on the iconic album cover, a limited edition illustration by musician and artist Klaus Voormann who performed on the album, as well as a copy of Paramahansa Yogananda’s “Light from the Great Ones” and Rudraksha beads, contained in individual custom-made boxes.

Released in August 2021 via Capitol/UMe to celebrate the 50th anniversary of All Things Must Pass, the 50th Anniversary Edition was met with worldwide acclaim and returned the album to the Billboard 200 where it debuted at No. 7. The album’s additional charting achievements included No. 1 placements on the Top Rock Albums, Catalog Albums, and Tastemaker Albums charts and the No. 2 slots on the Top Albums Sales and the Vinyl Albums charts, just behind Billie Eilish on both. ­Upon release in 1970, Harrison’s first post Beatles solo album was met by unanimous critical acclaim and spectacular commercial success, spending seven consecutive weeks at No. 1 on the Billboard 200 and eight weeks atop the UK’s official albums chart. All Things Must Pass’ return to the Top 10 marked the first time since 1971.

Hailed by Rolling Stone as “the War and Peace of rock and roll” and “an intensely personal statement and a grandiose gesture,” All Things Must Pass has only grown in influence and stature in the half-century since its initial release, including induction in the GRAMMY® Hall of Fame and inclusion on The Times of London’s “The 100 Best Albums of All Time” and Rolling Stone’s 2020 listing of “The Top 500 Albums of All Time.” Pitchfork declared it to have “changed the terms of what an album could be.” It was recently certified 7x platinum.