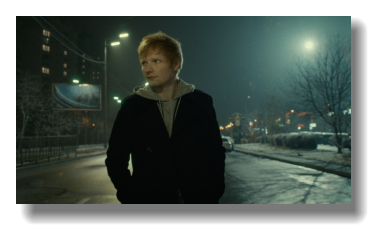 Speaking about the video, Ed Sheeran says – “I filmed the video for 2step in the city of Kyiv, Ukraine before the devastating acts of violence started to take place. It was my first time visiting the country and I felt so welcomed during my stay there – everyone from the production crew to the many people I met across my days off. Ukraine is a proud and resilient country and I’m grateful to have had the chance to film my video there. I stand with Ukraine and will be donating my record royalties from YouTube streams of the video to the DEC’s Ukraine Humanitarian Appeal x”

The video’s Ukrainian production company, Radioaktivefilm, added – “This video really reminds us of the best of times; it was the last video we did before our world fell apart. Watching it gives us some normality and happiness, and we hope you enjoy this video as much as we do right now.”

Last month, not only did Ed perform at ITV’s Concert for Ukraine in Birmingham, England, but he also played a slew of intimate underplays in London (Electric Ballroom/Alexandra Palace Theatre) and Brighton (Concorde 2) ahead of his upcoming ‘+ – = ÷ x’ stadium tour (pronounced ‘The Mathematics Tour’), which kicks off in Dublin, Ireland, on April 23rd and will see Ed return to London’s Wembley Stadium for a five-night run in June/July. Outside of today’s single/video drop, Ed’s latest musical output comes in the form of a collaboration project with J Balvin following the recent releases of ‘Sigue’ and ‘Forever My Love’.