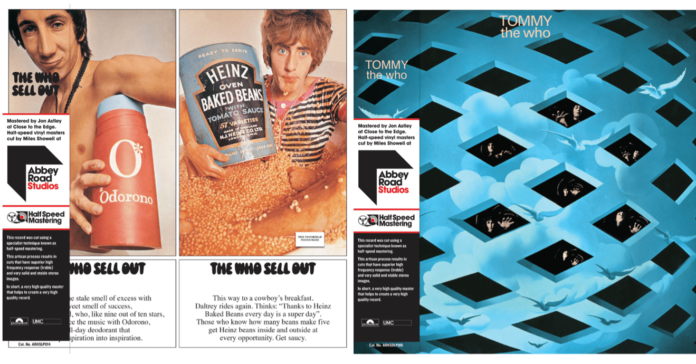 6th July 2022, see the release of the second in a series of half speed mastered studio albums from The Who; The Who Sell Out and Tommy.

These limited-edition black vinyl versions have been mastered by long-time Who engineer Jon Astley and cut for vinyl by Miles Showell at Abbey Road Studios with a half-speed mastering technique which produces a superior vinyl cut and are packaged in original sleeves with obi strips and certificates of authenticity.

Regarded as one of the most important albums of all time, Tommy is a rock opera about a Deaf Dumb and Blind Boy, which, when released in 1969, reached number 2 in the UK charts and #7 in the US. The album contains songs such as “Pinball Wizard”, “The Acid Queen” & “I’m Free” and is packaged in the original sleeve artwork.

Released in 1967, The Who Sell Out was the third album released by the band and is revered for being one of the first concept albums, celebrating the short-lived pirate radio stations of the late 60s with its groundbreaking use of fake adverts and jingles between songs.

Highlights include such as “I Can See for Miles”, “Armenia City in the Sky” and “Tattoo”, and as with Tommy, it has been mastered by long-time Who engineer Jon Astley from the original tapes and is housed in its original sleeve with obi and certificate of authenticity.

The Who are one of the top three greatest rock legacies in music history with 9 US & 10 UK top ten albums and 14 UK top ten singles.

They have played over well over 2000 gigs in a career spanning over 50 years including venues such as Woodstock, Monterey Pop, Glastonbury (twice), Hyde Park (four times), The Isle Of Wight (three times), the closing ceremony of the 2012 Olympics, Desert Trip, Shea Stadium, The Superbowl half time show and Live Aid to name but a very few.

Emerging in the mid-1960s as a new and incendiary force in rock n’ roll, their brash style and poignant storytelling garnered them one of music’s most passionate followings, with the legendary foursome blazing a searing new template for rock, punk, and everything after.

Inducted into the Rock n’ Roll Hall Of Fame in 1990, the band has placed 27 top-forty singles in the United States and United Kingdom and earning 17 Top Ten albums, including the 1969 groundbreaking rock opera Tommy, 1971’s pummeling Live At Leeds, 1973’s Quadrophenia and 1978’s Who Are You. The Who debuted in 1964 with a trio of anthems “I Can’t Explain,” “The Kids Are Alright” and “My Generation.” Since then, they have delivered to the world hits such as “Baba O’Riley,” “Won’t Get Fooled Again,” “Pinball Wizard,” Who Are You,” and,” You Better You Bet.”

In 2008, they became the first rock band ever to be awarded the prestigious Kennedy Center Honors. The Who has performed all over the world including global music events for the Super Bowl XLIV Halftime Show in 2010 and closing the Summer Olympics in 2012. The Who continued their charity work by playing a concert in January 2011 to raise money for trials of a new cancer treatment called PDT. In December 2012 they performed at the Hurricane Sandy Benefit in New York.

Alongside his groundbreaking work with the Teenage Cancer Trust in the UK, in November 2012 Daltrey, with Townshend at his side, launched Teen Cancer America, $1 from each ticket sold for the 2019 MOVING ON! tour which each night features a full orchestra will benefit Teen Cancer America.

With both Roger and Pete delivering their own memoirs (Pete’s Who I Am was released to much acclaim in 2012, and Roger’s autobiography, Thanks A Lot Mr. Kibblewhite; My Story, was embraced by critics in 2018) it’s fitting that the two remaining WHO members have shared their incredible legacy in literary fashion, for few bands have had a more lasting impact on the rock era and the reverberating pop culture than The Who.

The band released their first new album in thirteen years, the critically acclaimed WHO in 2019 and are currently on the road in the USA with their THE WHO HITS BACK tour.

SIDE 3
Do You Think It’s Alright?
Fiddle About
Pinball Wizard
There’s A Doctor
Go To The Mirror!
Tommy, Can You Hear Me?
Smash The Mirror
Sensation