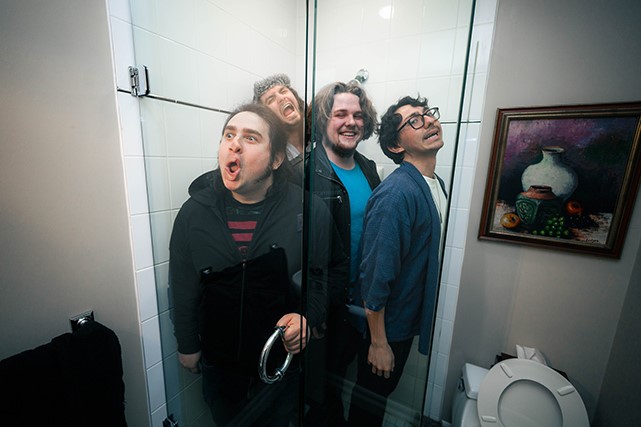 Hard-edged and funkadelic, Canadian group Numb Tongues deliver the ultimate mix of energy and groove in their newest single, “Dance.”

Numb Tongues is fronted by lead singer, lyricist, and co-founding member Jonah Grinberg who crafts his melodic hooks with a colorful character that only so few stages can contain. Giving the lineup its creative flair is a team that together is greater than the sum of its parts: Tristan Lipton with charming technical prowess on the guitar, bassist Max Wilson who has mastered the art of monster-truck-sized slaps, and the chaotic, beastly styles of drummer and co-founder Corey Ryan.

Arriving ahead of the Toronto-based four-piece’s new release, Low Hanging Fruit, the song is the product of the COVID-19 pandemic. Planning a show on Grinberg’s birthday, the band was forced to cancel and begin isolation. Without any idea what the future would hold, they got to work creating a few new beats that could serve as the foundation for a future project.

Eventually, they settled on the beat you hear in “Dance,” and got to work conceptualizing the project. They reached out to their friend, Montreal-based singer/songwriter Alexandra Willett, to sing the hook while adding some go-go style ad-libs — inspired by one of Numb Tongues’ favorite bands, Talking Heads.

From there the group secured Patrick Smith and Kyle Windjack to feature on the horns and Matt Snell for mixing; Snell has worked on projects for Dua Lipa and you can feel that liveliness here as well. Kristian Montano completed the master, adding the final touches to the finessed version of “Dance” we hear today.

To be fair, a party is the best way to describe “Dance.” Listeners are initially greeted with disco-esque drumbeats interlaced with record scrubbing and rhythmic deadened guitar whacking in an intoxicating composition that calls back to the days of live big band music. The electronic beats tied with Corey Ryan’s unique percussive loops give the song its positively infectious heart, and the marriage of horn swells and synth layers complement the overall composition — creating an effortless immersion in the intricacies of Numb Tongues.

“We want to make music that has a hard-edge funk sound and gets people to break out of their shells to have a good time — because that’s what life is all about,” the band shares. “That is what ‘Dance’ represents to us, and this is the kind of music we see ourselves expanding on going forward.”

“Dance” is a celebration of dance and partying, something there has been a dramatic lack of since COVID-19 shook the world. The spirit that flows through Lipton’s guitar when paired with Max Wilson’s powerful bass cadences creates an air of movement that is hard to ignore. The Justin Timberlake-inspired vocals that Grinberg can harness deliver the perfect amount of youthful spunk into the overall production. Tie in the trumpets and absolutely mad background rhythm section and you’re left with that will have you smiling, celebrating life, and dancing like no one’s watching you.

Numb Tongues harnesses a distinctly quirky and zestful brand of gritty funk-rock. Taking influence from artists like Red Hot Chili Peppers, Cory Wong, and Primus, the band is well known for their creative and dynamic songwriting abilities, advanced musicianship, and thoughtful lyrics. Catchy lead melodies intertwined with rhythmic grooves, Numb Tongues will melt your face and get you grooving.

“We wrote ‘Dance’ with the intention that we’d be able to create an ultimate version – something filling and bone-shaking….

“Something that we would be able to play live as a full band when shows began happening again.”

And with that, it’s time to get up and groove…