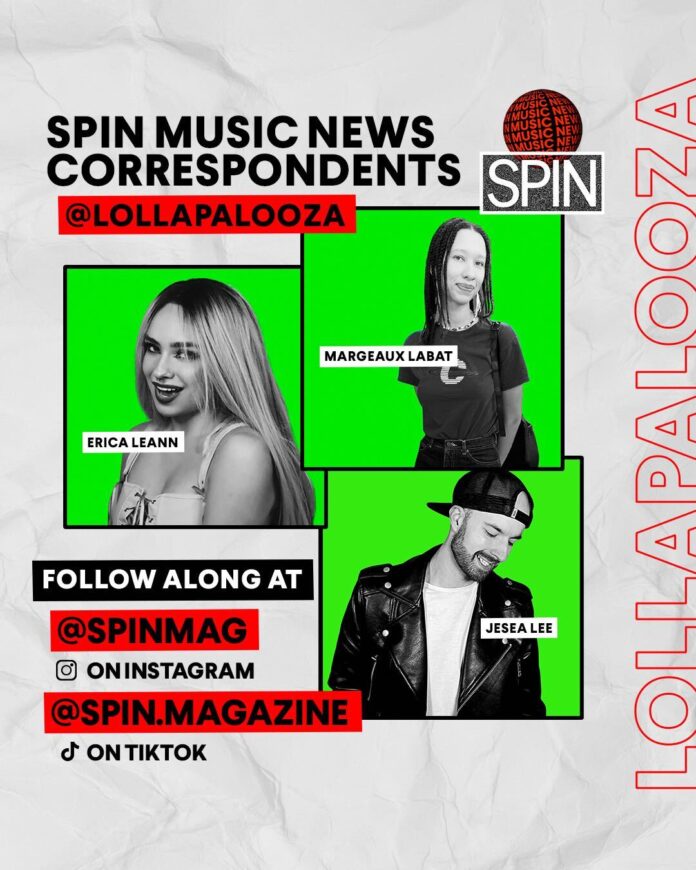 SPIN Magazine is rocking Lollapalooza this year by announcing its first-ever team of SPIN Music News Correspondents. The trio of creators will attend the festival with Creative Director Danny Klein, offering a first-person, music-lover’s perspective on all of this year’s Lolla happenings via SPIN socials, including TikTok, Instagram, etc.

SPIN’s inaugural Music News correspondents are Jesea Lee, Erica Leann, and Margeaux Labat. Jesea, who entertains and educates his fans with daily alt music news and recommendations, has built a following as the chill guy people want to talk music with. He offers commentary on the day’s music news, the latest trending tracks, and more.

Self-described “blonde metal chick” Erica is straight up and to the point, slicing into all things rock, hardcore, and punk. Her TikTok posts range from music bucket lists (“Bucketlist of bands I’ve never seen live”) to explorations of genres such as grunge pop punk and lists of BIPOC metal bands everyone should have on blast.

Margeaux is profoundly deep and knowledgeable about music and artistry analysis. She’s passionate about helping her followers discover new music, from tunes that lend a classy vibe to a dinner party to the best dreampop bands.

“We were definitely inspired by what the MTV VJs did for MTV back in the day — they brought fresh faces, personalities, and perspectives to the network,” notes SPIN Creative Director Danny Klein. “We’re thrilled to welcome Jesea, Erica, and Margeaux to the SPIN newsroom in that very spirit, and I’m excited to see them bring their collective passion for music and pop culture to the SPIN audience.”

SPIN, which rose to fame with its pull-no-punches music journalism, is reclaiming that territory, bringing together fun and often fiery observations with the music and the issues that matter today.

SPIN is one of the most recognizable names in music and pop culture. In early 2020, SPIN launched a new generation of the legendary media group, putting the brand back where it belongs — at the center of the zeitgeist. Recent digital covers have featured some of today’s biggest stars, including The Black Keys, YungBlud, Machine Gun Kelly, Jack Harlow, Denzel Curry, Run the Jewels, and Kehlani, coupled with probing journalism and in-depth interviews, hit series 5 Albums I Can’t Live Without, A Day In the Life Of, and Artist x Artist, as well as original videos.