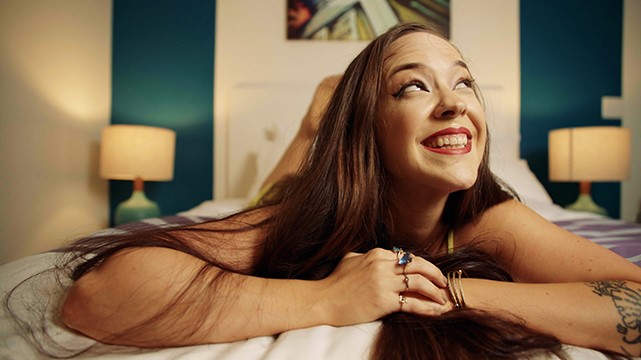 A lover who withholds is often frustrating, at best. With that, multi-award-winning Victoria, BC-based jazz songstress Alli Bean captures the dynamic’s push-pull perfectly in her new single “Twenty Questions,” from her recently released album, Outside Voice.

Framed as a series of increasingly probing questions for her lover, “Twenty Questions” features a funky, head-bopping groove, saucy and soulful vocals, and a chill “Doo doo doo” chorus over rollicking piano. Basically, it asks – in a detached and curious way – why the guy is such a damn narcissist:

What do you dream about while I awake from dreaming of you?
While I try to turn my light out, what is it you do?
Where do you go when you don’t have a plan?
Who are you when you’re not the front man?

The narrator inquires, somewhat sadly, why such a lover won’t let anyone in, but her smarts and self-respect get the better of her over and over again, as she challenges: “Why am I freezing in the heat while you’re struttin’ around so cold?” The overall message is a tried-and-true “you’re so vain,” so that the woman doing the calling out emerges as the song’s embattled hero.

It’s a theme that’s overarching on the album, recorded in its entirety in Bean’s tiny home studio during the pandemic. “Outside Voice is a culmination of works created along a personal growth journey,” Bean divulges. “We go through life making moves, and choices aren’t always conscious. By chasing people and seeking external validation, we find ourselves in dicey situations, leading us astray from what matters.

“When I realized I had this issue,” she continues, “I turned inward and began really asking myself what I was relentlessly pursuing – what did I need to let go of in order to find it? In that process, I said goodbye to a lot of habits and ideas that got in the way.”

Alli Bean is a multi-award-winning Canadian powerhouse blues/jazz/pop-influenced songwriter and vocalist. Drawing influence from a multitude of artists including Wynton Kelly, Horace Silver, Fiona Apple, and Amy Winehouse, her compositional style leans toward the bluesy, funky side of the street, with a twist of jazz and a dash of sass for good measure.