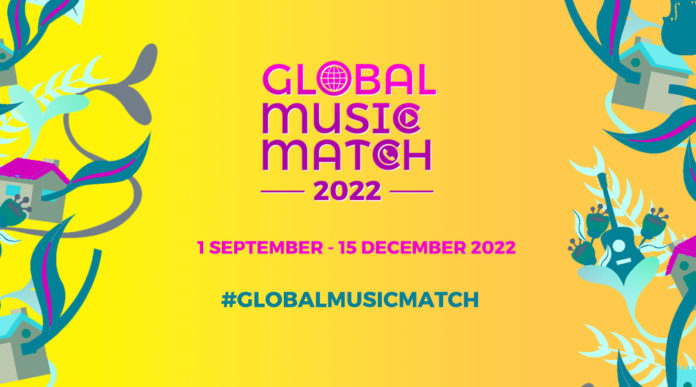 Following the resounding success of the first two editions in 2020 and 2021, Global Music Match returns for a third edition

The groundbreaking initiative was recognised by the international music industry at WOMEX last October, receiving their prestigious Professional Excellence Award. The latest iteration of Global Music Match will feature 60 artists from 16 countries and four continents in an export academy for developing artists. Participants from Australia, Brazil, Canada, Catalonia, Chile, Denmark, England, Finland, Iceland, Norway, Portugal, Sweden, Scotland, Taiwan, USA and Wales are set to collaborate over the coming three months, in what is widely considered to be the world’s largest online musical collaboration programme.

The third iteration of Global Music Match has evolved to focus on emerging artists who are just starting to explore and embark on their international careers. The 60 selected artists will develop their social media skills, learn about new markets, interact and collaborate with fellow musicians online all while creating new and engaging content.

Participating artists are grouped into international teams of six, from different countries, and over the coming 14 weeks will collaborate with each other online. Each act has an assigned ten-day Spotlight period, during which time their five teammates will introduce them to five new international audiences – an invaluable opportunity, given that many of these artists haven’t yet had the opportunity to tour internationally.

CIMA is very excited to return to Global Music Match during the third edition to increase the Canadian participation alongside founding partner the East Coast Music Association. CIMA will represent six fantastic Canadian acts from across the country:

Get to know the Canadian artists better by clicking here.

The inaugural Global Music Match programme culminated in a four-hour-long online broadcast at Folk Unlocked, the acclaimed digital edition of the Folk Alliance International conference in the USA in February 2021. Following on from the WOMEX award, the success and popularity of Global Music Match continues to grow and gain worldwide recognition. Discussions are now underway to hold a live showcase event at Showcase Scotland 2023 as part of Celtic Connections festival, where artists from previous editions of Global Music Match will feature.

Canada’s Terra Spencer, who participated in Global Music Match 2021, said: “As a solo artist, any opportunity to collaborate is a welcome one, but what I didn’t expect when I applied for Global Music Match was to find genuine connections that transcended geography, genre, and language. I found great joy in making music and more with my teammates, and the friendships have extended beyond the GMM project as we continue to cheer each other on from afar. GMM has truly opened doors for me on a global scale as an emerging artist – it landed me a spot in my first Western Canada festival, gave me the courage to secure a booking agent, and I will have GMM friends waiting for me this summer when I play my first show in Glasgow. I am so grateful to the whole GMM team for the opportunity that keeps on giving!”

Showcase Scotland Expo Executive Producer, Lisa Whytock said: “We’re really excited to see Global Music Match kick off again. The idea came about on a Zoom call between myself and Millie Millgate of Sounds Australia early on in the pandemic and we have since seen it grow to include so many export organisations and artists – all of whom continue to amaze us with their positive outlook and enthusiasm for the opportunities it presents.

It truly has become a family and now that international events are open again it’s been fantastic to meet so many artists and organisations in person. At WOMEX last year Global Music Match was honoured to receive the Professional Excellence Award and it was made extra special by being able to celebrate with some of the artists, festivals and export organisations who participated in the first two editions.

Global Music Match really harnesses the power of collective markets, and ultimately the goodwill and supporting nature of the worldwide music community. We are really looking forward to seeing how all the artists work together this time round. With so many from around the world, most of the musicians won’t have met in person – let alone toured in their respective countries – so once again it really is going to establish new and lasting international connections.”