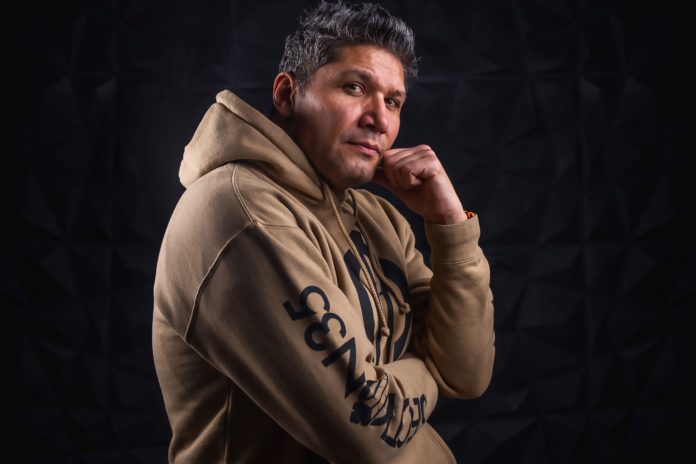 Truly a visionary in his craft, Plex consistently releases hard hitting hip-hop anthems reminiscent of old school rap that progress the civil rights agenda. Who Am I To Judge carries this banner proudly.

Following the release of “Great Ones (E’s Up)”, a track that topped the Indigenous Music Countdown this year, the critically acclaimed rapper debuts his newest project, Who Am I To Judge and has released the new song “Red Flags” featuring Aleah Belle. The 12-track LP is curt – corporate greed and manufactured hate are a toxin in the veins of society, condemning corrupt governments, cultural appropriation, uncanny wealth, and the toxic remnants of fake news and sinister intentions.

Plex’s tenure in the music industry is blatantly obvious. Finessed productions and clever wordplay serve as the cherry for this seasoned musician. Who Am I To Judge reflects everything that Plex believes in – and fights for.

As for the LP itself, Who Am I To Judge is a polished example of professionalism and musical integrity. Each song is built from the bottom up with a pure heart filled with discontent about worldly and civic issues. For every bone-rattling 808/kick drum combo, there is a borderline soul-crushing revelation delivered in a verse. Plex dissects his newest album, saying, “The album speaks directly about Plex’s struggles with drugs and alcohol, the evolution of hip hop, cultural appropriation, and the state of the planet – all while pondering what it may take to fix it.”

Who Am I To Judge features collaborations with artists from both the hip-hop and Indigenous communities, including Lady Luck, Kryple, Drezus, Touch, and Rellik. In addition, Plex worked with acclaimed artist and producer 2oolman and Cashmere Brown, known for his production on Kanye West’s Donda.

Born in Edmonton, AB and now based out of Barrie, Ontario, Plex is an award-winning hip-hop artist and producer. Plex has been a major player in the music industry for almost 30 years, Plex has raised the bar amongst his Indigenous peers. Through his influence, he has built a strong and relevant presence in Canadian Hip Hop.

Since releasing his debut solo album in 2009, Plex has toured across the US and Canada performing, teaching workshops to Indigenous youth and running his independent record label, New Leaf Entertainment. In addition, Plex’s music video “The Way It Should Be,” featured on his first album Brainstorm, has received critical acclaim from across the globe.

“The Way It Should Be” music video has screened across 30 film festivals worldwide, receiving 7 awards.

Plex is hailed has a master at his craft, titled a visionary who has dedicated his work to his community through artistic expression.