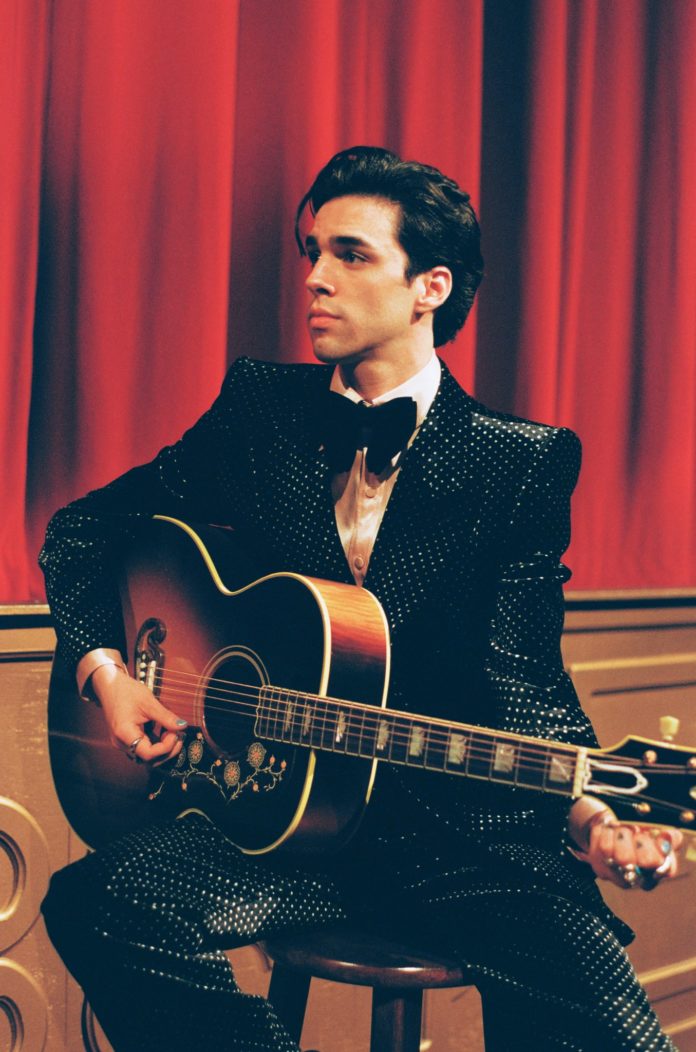 On the new song and next chapter of music, Sanchez said: “The song lyrics were written by myself, Trent Dabbs, and Nick Lobel (Sam Smith & Harry Styles). Nick Lobel sampled the 10 second intro of Bobby Goldsboro’s song, ‘Honey,’ and put together a verse and chorus for me to hear in the studio. Once I heard that, I felt immediately inspired. The song came to life in 15 minutes. Sampling is not something I’ve ever done nor have I felt moved to pursue, but it was honestly a happy accident that day. Even the way I performed it was extremely new for me. This song really made music fun for me again. It’s opened a world and lore I’m excited to invite fans into.”

Dreamy keys dissolve into a delicate hum on the track. As cymbals simmer in the background, he promises, “Baby give it all, I’d give it all just to make you mine.” Over the ebb and flow of an ethereal soundscape tailormade for a fifties romance, his inflection echoes with soulful grit as the hypnotic and heavenly hook rings out with a promise, “I’ll be the pillow, and I’ll be the bed.”

Today, Sanchez announces his fall North American headline tour. The 32-date tour kicks off in Indianapolis, IN and makes stops at Los Angeles’ The Wiltern on November 3rd, Nashville’s Ryman Auditorium on November 17th, and New York’s Terminal 5 on December 2nd. Tickets go on sale on Friday, January 27th at 10am local time at https://www.stephensanchezofficial.com/tour.

The fall run follows his upcoming spring headline tour, which is almost completely sold out and kicks off on February 7th in New Orleans, making stops in Nashville on February 11th, New York on February 16th, Los Angeles on March 9th and 10th – see the full list of upcoming tour dates below.

“Evangeline” arrives on the heels of Sanchez’s recent collaboration “Missing You” feat. Ashe. In addition to amassing over 4 million global streams to date, Billboard plugged it as one of “10 Cool New Pop Songs to Get You Through The Week,” going on to note, “A true collaboration, the pair trade verses and challenge one another to push hardest on the chorus, allowing the song’s story to soar both sonically and emotionally.”

Last year, Stephen’s acclaimed Easy On My Eyes EP boasted his breakthrough smash “Until I Found You.” Not only did the latter eclipse 1 billion-plus global streams and 83 million-plus views on the official music video (watch here), but it also vaulted into the Top 25 on the Billboard Hot 100, Top 20 on the Spotify Global Top 50, Top 3 at AAA Radio, Top 10 at Top 40 Radio, Top 15 at Hot AC Radio, and Top 25 at AC Radio. Recently, “Until I Found You” with Em Beihold version skyrocketed to a new peak, cracking the Top 10 on the Spotify Global Top 50 Chart. Meanwhile, Stephen catapulted to #20 on the Billboard Hot 100 Songwriters Chart. Recently, the song was heavily featured in the finale episode of Netflix’s new season of Ginny & Georgia.

Not to mention, Sir Elton John applauded Stephen during his Apple Music Rocket Hour. He professed, “I just fell in love with this song and his voice. It’s such a brilliant song. It’s a throwback to 1950’s music.” Elton invited him onto the show as a special guest, and a fascinating interview ensued. Listen to the full interview here on Apple Music.

Stephen also notably lit up television shows such as The Late Show with Stephen Colbert, Late Night with Seth Meyers, and acoustically on GMA3. Meanwhile, MTV handpicked him as its Global PUSH Artist in September, and he was nominated for two 2022 MTV EMAs for “Best New Artist” and “Best PUSH Artist.” Watch his Global PUSH performance of “Until I Found You” here and mini doc here