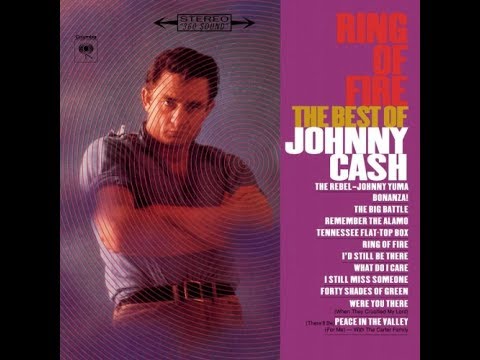 The song was recorded on March 25, 1963, and became the biggest hit of Johnny Cash’s career, staying at number one on the charts for seven weeks. It was certified Gold on January 21, 2010 by the R.I.A.A. and has also sold over 1.2 million digital downloads.

Although “Ring of Fire” sounds somewhat ominous, the term refers to falling in love – which is what June Carter was experiencing with Johnny Cash at the time. Some sources claim that Carter had seen the phrase “Love is like a burning ring of fire,” underlined in one of her uncle A. P. Carter’s Elizabethan books of poetry. She worked with Kilgore on writing a song inspired by this phrase as she had seen her uncle do in the past. She had written: “There is no way to be in that kind of hell, no way to extinguish a flame that burns, burns, burns”.