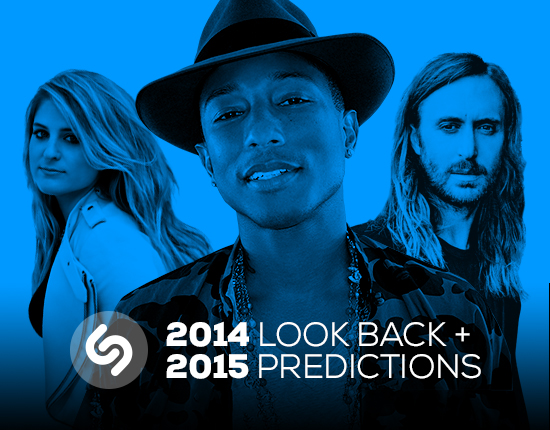 Shazam has released the Top Ten Most Shazamed Artists and Tracks of 2014 below and see if your favorite hit made it to their lists.

They also gavean inside look into their predictions for Shazam’s Hit Makers of 2015. Take a look at their  picks spanning pop, rock, country, dance and more – if you haven’t heard of them yet, I guarantee you will soon. Be the first to tune into these breakout artists and watch as they wow the world in the New Year.

Top Ten Most Shazamed Artists of 2014 in the US:

Top Ten Most Shazamed Songs of 2014 in the US

Young Thug: Every track Young Thug has touched in 2014 has been massive. The next 12 months look bright for this 22 year old rapper.

Echosmith: This teenage band has slowly built over the last 16 months to become one of the most Shazamed acts in the US. Echomsith enters 2015 on a crest of a wave with “Cool Kids” having caught on and a successful summer headlining the Warped Tour.

Rae Sremmurd: Rae Sremmurd have had two of the biggest rap singles of the past six months. They’ve worked with Nicki Minaj and are currently being mentored by the in demand producer, Mike Will Made It.

Oliver Heldens: This Dutch 19 year old is already a massive DJ and a huge draw at festivals but 2015 could see him go to the next level of dance music stardom. His new track, ‘Koala’, is currently one of the most reactive dance records on Shazam.

DeJ Loaf: This Detroit rapper has had one of the breakthrough songs of the year with ‘Try Me’. She’s now been signed to Columbia and Drake’s a noted fan. Her new mixtape is already receiving a great reaction on Shazam.

Sam Hunt: Sam Hunt is set up to be one of the next big country music stars. His song ‘Leave The Night On’ was the second most Shazamed Country song of 2014 and his album is already receiving a massive reaction with Shazam users.

James Bay: This British singer songwriter is already being talked about as the next Ed Sheeran. His songs have been hugely reactive from minimal radio play- most notable from a few early spins on Radio One in the UK.

Maddie & Tae: This act has been number one in Shazam’s Country charts for over 8 weeks. The Texan duo may be headed for cross-over success when their album drops sometime next year.

Years & Years: This English act could be the next big pop act. They were featured on ‘Sunlight’ by The Magician, a big radio hit in Europe. Their debut album is expected sometime in 2015.

Tchami: This French producer is one of the few acts that have broken into the Shazam charts with only specialist radio and club playing his music. His song, ‘Promesses’, is going to be a big cross over hit early next year.

Raury: This 18 year old Atlanta born singer has a sound influenced by Andre 3000, Bon Iver and Frank Ocean. He’s drawn comparisons to Lorde and is featured on the new Huger Games soundtrack – incidentally curated by Lorde herself.