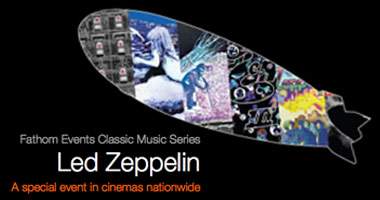 The greatest band in rock ‘n roll history will be back on the big screen for an incredible one-night event on Monday, March 30. The second in the Fathom Events Classic Music Series, Led Zeppelin spans the entire live concert career and captures the sound and fury of the band on stage. This exclusive cinema event will give fans a larger-than-life concert experience featuring legendary live performances from London’s Royal Albert Hall in January 1970, their historic dates at New York’s Madison Square Garden in July 1973, their triumphant five-night run at London’s Earl’s Court in May 1975, and their record-breaking shows at England’s Knebworth Festival in August 1979.

Led Zeppelin continues to be honored for its pivotal role in music history. The band was inducted into the Rock & Roll Hall of Fame in 1995, received a Grammy Lifetime Achievement Award in 2005, and a year later was awarded with the Polar Music Prize in Stockholm. Founding members Jones, Page and Plant – along with Jason Bonham, the son of John Bonham – took the stage at London’s O2 Arena in 2007 to headline a tribute concert for Ahmet Ertegun, a dear friend and Atlantic Records’ founder. The band was honored for its lifetime contribution to American culture at the Kennedy Center Honors in 2012. In January of 2014, the band won their first ever Grammy award as Celebration Day, which captured their live performance at the Ertegun tribute concert, was named Best Rock Album.