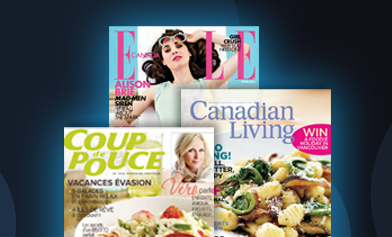 TVA Group Inc. announced the closing of the transaction involving the acquisition of 14 magazines, 3 websites and custom publishing contracts owned by TC Transcontinental. TVA Group is pleased to welcome the 300 TC Transcontinental employees that are joining its teams today. This all-cash transaction valued at $55.5 million was announced November 17, 2014 and received approval from the Competition Bureau.

“We are very pleased to have completed this transaction, which is part of the strategy to consolidate our position as a leader in the magazine industry. TVA Group has now gained greater agility and efficiency, two essential components in a competitive market,” said Julie Tremblay, President and CEO of Media Group and TVA Group.

“The complementarity between these two talented teams will not only provide readers with the same high quality content, but will also allow our clients and partners to benefit from a more extensive portfolio of brands to reach the consumers,” added Lucie Dumas, Vice President, Group Publisher, Magazine Division.

This transaction meets TVA Group’s primary mission that is, and remains, to invest in the production and distribution of entertainment and information content that is of the highest quality, rich and diverse.

(i) TVA Group will also keep a 51% stake in Les Publications Transcontinental-Hearst inc. which operates Elle Canada and Elle Quebec, in partnership with the Hearst Group which holds a 49% stake.