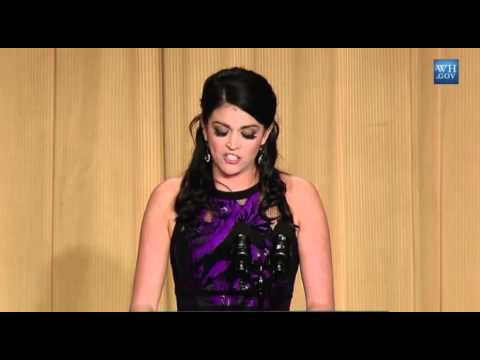 Cecily Strong took hilarious shots at media stars and politicians during the 2015 White House Correspondents’ Dinner on Saturday. And I mean, really, really awesome lines. If you’re a fan of her on SNL, you’re in for a treat.

Here are five awesome pointed barbs from her speech.

On Washington sex scandals: “‘It is great to be here at the Washington Hilton,’ is something a prostitute by say to a Congressman.

On Fox News’ demographic: “Fox News has been losing a lot of viewers lately, and may they rest in peace.”

On SNL’s controversial ISIS skit: “Even us at SNL got criticized this year for making fun of ISIS. I think that’s unfair. I mean, if anyone is guilty of taking ISIS too lightly, it’s him. [Gestures at Obama.]”

On Hillary Clinton’s campaign: “I think she feels the same way Meryl Streep feels when she’s asked to audition for something: ‘Are you kidding me? You’re making me go through this? You know I’m going to win.’ ”