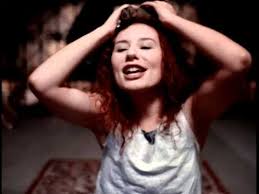 Have you encountered the ageism that’s doled out to a lot of older female musicians?

When an actress is over 60, the public will accept that she’s a grand dame. But when you’re still singing and writing songs, there isn’t a role in the music business where you play the grandma. We don’t go to see Tom Petty or Bruce Springsteen to see a granddad singing granddad songs or to revisit only his past. Noel Gallagher, Paul Weller, the Chili Peppers – they aren’t far from me in age, but these guys are still putting out work that’s considered relevant, but there’s an attitude that the women have had their day, so they should give room to the younger ones. But that doesn’t apply to men. It was Tash, my daughter, who came to me and said: “Mom, you go out there and play alone and you kick ass. But some of those [younger female artists] are stealing your moves and it matters to me. You go and remind the children, because they think these twentysomething girls came up with this crap.” And she said: “Go out there!”

There seems to be a vilification of older women – Madonna took a lot of flak when she fell at the Brits.

Let me ask you: was there a lot of meanness about her?

There were a lot of unpleasant comments on Twitter.

Madonna is an entertainer. There are very few people who could’ve gotten up off that floor. It wasn’t because of her that she fell, but it was because of her that the performance carried on. Some of the vilification comes from women as much as men. She’s making choices and she’s able to do things physically that a lot of people 25 years younger can’t; she got up and refused to allow that to shame her. I think people want her to be shamed into a role that they find acceptable for her age. It makes me sad that we can’t embrace Madonna and say, Wow, this is an artist who’s expressing herself in a certain way.