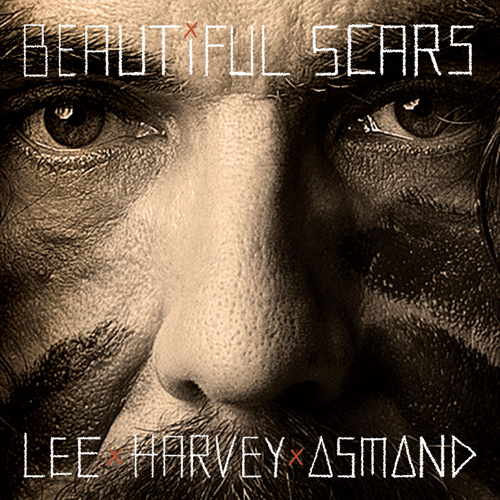 Eric: I was going to start this interview off by telling you Lee Harvey Osmond’s bio, aka Tom Wilson aka One of Three Rodeo Kings aka that large, melodic growling man from the former Junkhouse has a new record. This record is called “Beautiful Scars,” as in: “Man, that scar is beautiful,” or “She has a beautiful scar right here…” or “My scar is beautiful. It reminds me of that time I didn’t die.” And it goes on. And it’s a great bio. But when I was growing up, Junkhouse was probably one of the most intimidating bands I’ve ever seen because if you know what Tom Wilson looks like, you know exactly what I’m talking about. But if you’ve ever spoken with Tom Wilson, he’s like a Caramilk bar, hard on the outside, and a real softie inside.
Tom: Awe baby, I’m one sweet filling.
Eric: What makes you decide to put a Lee record out, as opposed to calling up Colin Linden (along with Stephen Fearing who make up Blackie And The Rodeo Kings) and everybody and getting that band back together. Or Junkhouse? Or putting it under your own name. How do you decided when you’re writing where it’s going to go?
Tom: I think I decided around the age four that I wanted to be an artist of some kind. I didn’t know what that meant and I didn’t want let the world to tell me what that meant. But the one thing I did understand about being an artist, even at the age of four, was that it wasn’t something that you do so that you could sit around waiting for other people to tell you what to do. I guess I had some…I guess I had some authority issues at the age four. So now I’m like 56, so you can imagine the authority issues I have now.
Eric: It must go deep.
Tom: Yeah, basically being an artist is the ability to be able to do whatever you want to do, whenever you want to do it. Like the fact we put Lee Harvey Osmond together about six years ago with members of the Cowboys Junkies, and the Skydiggers, and the Sadies, and Hoxy Workman, and Oh Susanna, and Brent Titcomb, and members of Junkhouse. That was just like, a bunch of people getting together who are able to treat music and play music without ego. So that’s actually how I end up making Lee Harvey Osmond records is being able to surround myself with people who can play music without showing off.

Eric: The brand new album is called Beautiful Scars. Your lack of respect towards authority, How deep does the pain get? How deep does the anger get? How deep does the disrespectfulness get? Because sometimes you have to go through the pain in order to get to the other side.
Tom: Wow Eric, you know what, that’s a brilliant question. I don’t know how old you are Eric…
Eric: I’m 45 and I probably have the exact same authority issues as you do. I just choose to go in another direction because I can’t play an instrument and kick out the jams like you can. But I can hang out with people like you until you tell me to go home and live through you a bit by doing publicity and spreading the word.
Tom: Here’s the deal. When you get into your 50s, you actually become the man that you always wanted to be. We fight throughout our lives to kind of stand up to other people’s levels of bars, you know what I mean. We try to reach other people’s bars, which is unfair. If we’re able to learn we can only be ourselves, we’d probably have a really happy first 50 years of our life. Instead of landing in your 50 and actually after having to have gone through, you know, drug addictions, and divorces, and a long 40 years on the road, you realize that you can only be yourself. And once I realized that I’m about the happiest I’ve ever been in my life.
Eric: And when did you realize that?
Tom: I realized that in the last four years or so.
Eric: What made you realize that?
Tom: It was the fact I actually looked in the mirror and my face was actually starting to come into place. It’s almost–it’s almost like we morph over our lives. We look at ourselves in our teens and we just looked fucked up right. You know what I mean, we got pimples and we got–our eyes aren’t quite right with our face. And that kind of thing, we’ve got weird hair growing on our faces. By the time we get into–by the time we get into our fifties our face almost looks like it’s coming into place. It almost looks like our eyes, and mouths…It’s like we actually become handsome after 50 years. The same thing is going on inside and the thing we carry with us is our beautiful scars. Beautiful scars is being able to own what has hurt us and not have to hold it up as an example. We don’t have to cross and crucify, we don’t have to hang it or burn it anymore in public. We can actually live with it inside of us and it’s a part of us now.

Eric: Tell me about the song Bottom of Our Love. There has to be a story behind it.
Tom: It’s a song I wrote for Miriam Toews, the author. I dedicated it to my friend Gary. He put on a Speedo bathing suit and got a pistol and robbed a Royal Bank back in the late 70s. And my advice was that you shouldn’t really rob banks in Speedo bathing suits, it never works. The other thing is that, it’s about a little bar that I used to play as a teenager that he used to hang out in. So, Bottom of Our Love, it’s a factious disaster.
Eric: If Canada ever has a music Mount Rushmore, you would have all four faces. I would put you right there without anyone else for each of the bands you’re in.
Tom: Yeah, well my head is so big already. I found out I was adopted a couple of years ago. So I grew up thinking I was like an Irish guy, my whole life. Ends up, I end up being a Mohawk. I’ve been through, once again, 53 years of thinking I was one person and I end up being this other guy. So you know…
Eric: It’s like I don’t even know who you are anymore, Tom Wilson.
Tom: It’s hard to know, isn’t it?