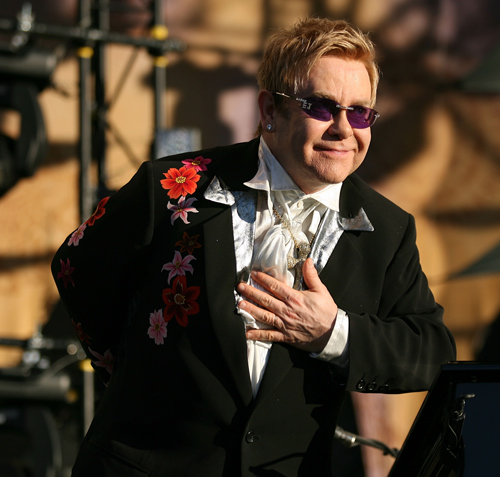 In almost every scene, in almost every city, becoming a musician or working in the music industry still seems to come part and parcel with heavy drug use. It’s a cliche – yet one that continues to ring true in 2015. What is the continued allure of cocaine, for people starting out in bands?

Elton John: “Well there’s certain people I’ve known, young musicians who are beginning to make it and they’ve disappeared into the bathroom come and I’ve gone, ‘Are you doing coke?’ and they’re going, ‘Yeah!’ I said, ‘Well that’s not a very good idea’ and they say, ‘Well it’s what I’m supposed to do, isn’t it?’ No, you’re not supposed to do it, it’s a fucking horrible drug. It brings out the worst side of your soul, you don’t need it, you’ve got so much talent. Stop it. It’s alright to have a drink but as soon as you go down that path it’s a path to…eugh.” He trails off for a moment.

“It’s crazy but it’s a cliché and a fucking horror story! You’re supposed to be making music. Just because Amy Winehouse died at 27 and Jim Morrison died at 27 and Jimi Hendrix died at 27 it doesn’t mean you have to as well. It’s bullshit and it’s so sad when you see that happen to someone. When you’re a drug addict and an alcoholic, you’re a completely lying, devious rat. It makes you so deceitful. It’s all about deceit, lies. ‘No I didn’t do that, no I didn’t do a line of coke, no I didn’t do this, I’m quite healthy, I’m very good, I’ve been out for a walk’. Bullshit. When you’re an addict, it’s all about bullshit.”