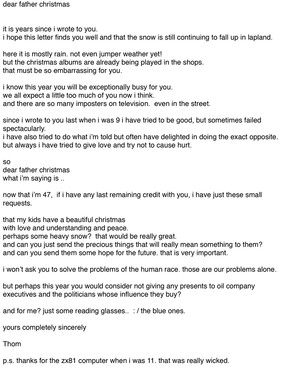 December 7 is National Letter Writing Day, and to mark the occasion, Letters Live – the performance event series celebrating the glory of literary correspondence – has announced a limited run at London’s Freemasons’ Hall from 10 to 15 March next year. They’ve also tasked a number of actors, musicians and writers to share their letters to Father Christmas.

it is years since i wrote to you.
i hope this letter finds you well and that the snow is still continuing to fall up in lapland.

here it is mostly rain. not even jumper weather yet!
but the christmas albums are already being played in the shops.
that must be so embarrassing for you.

i know this year you will be exceptionally busy for you.
we all expect a little too much of you now i think.
and there are so many imposters on television. even in the street.

since i wrote to you last when i was 9 i have tried to be good, but sometimes failed spectacularly.
i have also tried to do what i’m told but often have delighted in doing the exact opposite.
but always i have tried to give love and try not to cause hurt.

so
dear father christmas
what i’m saying is ..

now that i’m 47, if i have any last remaining credit with you, i have just these small requests.

that my kids have a beautiful christmas
with love and understanding and peace.
perhaps some heavy snow? that would be really great.
and can you just send the precious things that will really mean something to them?
and can you send them some hope for the future. that is very important.

i won’t ask you to solve the problems of the human race. those are our problems alone.

but perhaps this year you would consider not giving any presents to oil company executives and the politicians whose influence they buy?

and for me? just some reading glasses.. : / the blue ones.

p.s. thanks for the zx81 computer when i was 11. that was really wicked.