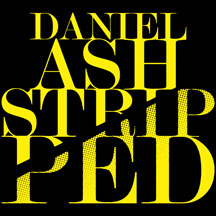 For over 35 years, Daniel Ash (Bauhaus, Tones On Tail, Love & Rockets) has been one of the seminal figures in alternative music; whether for his wildly experimental guitar playing or for his sardonic vocal stylings, or perhaps even for throwing in a bit of saxophone. Having defied categorization by fusing elements of electronica with punk, goth, and glam rock, Ash has earned the status of a living legend.

Stripped (Main Man Records) is Ash’s first studio album since 2002. The album features all “re-takes” done in a style that resembles dub-step, variations of EDM, Atmospheric and Ambient “A-La Brian Eno Meets Bowie”. Avid fans may recognize the songs but in reality they are at times completely different in a genetic recombination passing through a centrifuge

The biggest commercial hit by Love and Rockets was “So Alive” which in itself is a masterpiece. the record went to #3 on the Billboard Pop charts. Legendary producer of the original John Fryer was tapped for the new version of “So Alive” along with “Love Me” and the Bauhaus classic, “Slice Of Life.”

Stripped also features producer Mat Mitchell of Puscifer on the track “Christian Says” and Adam Bravin of She Wants Revenge on “OK This Is the Pops.” Both classic songs are originally from Tones On Tail, the band born out of the ashes of Bauhaus and later became Love and Rockets.

Tracklisting:
So Alive
Love Me
Ok, This Is the Pops
All in My Mind
Too Much Choice
No Big Deal
Slice of Life
Mirror People
Christian Says
Come On
There’s Only One
An American Dream