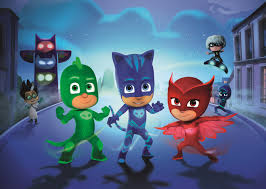 Entertainment One (eOne), the global independent studio, has appointed Simon & Schuster Children’s Publishing master publishing partner for its hit animated preschool series PJ Masks in North America. The debut collection of books will let fans of the top-rated series, which airs daily on Disney Junior Block and Disney Junior the Channel, to more fully immerse themselves in their favorite superheroes’ action-packed adventures while honing their budding reading skills. The new PJ Masks titles arrive at retail beginning this fall.

“We’re thrilled to team up with Simon & Schuster on a ‘super’ collection of PJ Masks books that will help young children develop a love of reading as they join in the heroic adventures of the PJ Masks,” said Joan Grasso, VP of Licensing, North America at Entertainment One. “The appointment of Simon & Schuster is part of our ongoing strategy to select best-in-class partners for the brand, and we look forward to working together to develop an even broader range of books for young fans to enjoy this fall and in the years ahead.”

“With the superhero craze reaching even our youngest readers, we were looking for a property with adventure and spirit, but one that was perfectly targeted for preschoolers,” said Valerie Garfield, VP, Publisher of Novelty and Licensed Publishing, Simon & Schuster Children’s Publishing. “It was PJ Masks to the rescue!”

The new PJ Masks books from Simon & Schuster set to soar at retail include a broad mix of story, novelty, and board books, as well as ready-to-reads. They join an introductory range of toys and playthings from master toy licensee Just Play, which begins rolling out at retail across North America this fall and then expands into international markets in 2017. With these initial licensing partners, eOne has built a strong foundation for a successful and expansive consumer products program for the popular brand that will span a wide array of additional categories. In addition to the upcoming licensed products, a new PJ Masks website, a free app and music videos are all set to launch this year, further extending consumer engagement with the standout brand.

In the U.S., the pajama-sporting preschool superheroes – Catboy, Gekko and Owlette – won over young audiences and their families with the very first episode, which attracted 1.6 million unique viewers on the Disney Channel and Disney Junior, the #1 24-hour preschool network for the past three years. Since its September 2015 premiere, the CGI animated series quickly became one of Disney Channel’s top rated shows. For Q1 2016, PJ Masks reached 8 million kids ages 2-5, including 4 million boys ages 2-5.

Following the show’s mighty U.S. debut, PJ Masks went on to thrill young audiences around the world, including France, the UK, Italy, Spain, Germany, and beyond.

Produced by eOne and Frog Box, in collaboration with the award-winning French animation studio TeamTO, along with Disney Junior and France 5, PJ Masks is based on French author Romuald Racioppo’s popular picture book series “Les Pyjamasques.” By day, 6-year-olds Connor, Amaya and Greg go to school like kids everywhere. But when they put on their pajamas and activate their animal amulets, the crime-fighters magically transform into their dynamic superhero alter egos and become the PJ Masks: Catboy, super-fast and agile; Gekko, super strong and able to scale walls; and Owlette, with the power to fly and see great distances. In each episode, the three heroes embark on exciting adventures and work together to solve mysteries and learn valuable lessons along the way.