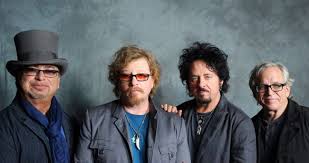 Salon talks to Toto’s Steve Lukather about rock longevity, the future and what it means to be “the ‘Africa’ band”

It’s funny that you say that so much of Toto’s audience is younger, as that’s the sense I get, too.

I’m really surprised. Let me give you an example: 2012 was our 35th anniversary from when we started the first album, and we had sold 35 million records worldwide. Fairly impressive for a bunch of people that think we had, like, three songs that were worth a shit—when in fact we had a lot more hit singles than people think. What happened was, between that moment and last year when we played Barclays Center in New York, Sony came out to us and handed us a plaque for 40 million sales. We’re like, “Okay, what happened in the last couple years?” [Laughs.]

I think what’s happening is these kids hear the song and they go, “Well, what else have these guys got?” And they find out we’ve got 14 other albums and they buy ’em, and all of a sudden we’ve got this new interest. We’re almost like an underground thing. People like to be into shit that’s under the radar, and then they find out that they actually like some of the other stuff that we do. They come see us live, and we’re really fucking good live, and we’re creating a new audience for ourselves in a very organic way. Which is very exciting and very surprising, I have to be honest, I look up in the sky and go, “Thank you God! Thank you!”

We are like the tortoise and the hare. We’ve taken so much shit from day one from the press and the rock critics and all that stuff. They tried to kill us, and we can’t be killed. After a nuclear disaster there will be very little life on earth and us. [Laughs.] Because we’ve withstood every disaster. Two brothers dying in the band. Death, drugs, divorce, being ripped off by business people and bad management, getting screwed over by the ex-record company, which now all those people are gone. We just stayed the course. People lapped us, passed us, laughed at us, and now all of a sudden we get this respect, like, “Wow, you guys really hung in there. You guys are good.”

One of the guys writing my book with me is this guy Paul Rees, he used to be the editor of Q Magazine in the U.K. And he said, “We were not allowed to write about you.” The fucking editor said, “We can’t write about you.” It’s like that whole Jann Wenner attitude, they deny the fact that my band has played on over 5,000 records, 220 nominated records, some of the biggest records in history, and we’ve sold 40 million records on our own, yet we don’t exist. They’re gonna eventually have to deal with us face to face, because we’re not gonna die.

Why was it that they wouldn’t cover you?

I’ll never know! There’s nobody like us in rock history. I’m not saying we’re the greatest band in the world—that would be ridiculous. I’m standing next to a guy who used to be in the greatest band in the world, the Beatles, so I know what greatness really is. But we have contributed a lot. We were the fucking house band for “Thriller,” but nobody ever mentions our name. Stuff like that.

I mean, I’m cool enough for Miles Davis to call me on the phone and go, “You want to join my band?” So if Miles Davis thinks that we’re cool, I don’t really give a shit what some smarmy rock critic says. And we’re so over it—I think they’re on to picking on Nickelback now, which is maybe a more worthy subject.

We can play. We played on a lot of different records in a lot of different styles. Played on a lot of hit records—either wrote, played, produced, arranged. We’re always there, but nobody wants to admit that we exist, as far as mainstream media. Which doesn’t bother me, because all of a sudden we’ve become this underground band. You can’t be out of style if you were never in style, so we just sort of existed, bubbling under. People like our stuff, some people hate it, but that’s like anything, right? Some people love donuts, some people are allergic to ’em. It’s all the same shit.

There’s a lot of options out there, but we’re classic rock that hasn’t been overridden like a horse Some of these bands are like, “Okay, I’ve seen it, I’ve heard it.” They play the same 12 songs every time, which is great for memories every once in awhile, but we’re not that band. Some people think, “Oh it’s that ‘Africa’ band, I hate that fucking song,” and for some reason they think that’s all we do.

Which really, that’s the most oddball song we’ve ever written in our career, and it turns out to be our biggest song. I was the guy saying, “This is a great fun track, but what the fuck is this song about, David [Paich, Toto keyboardist/vocalist]?” I said, “If this song is a hit I will run naked down Hollywood Boulevard.” Well, being 58 years old, I don’t think anyone wants to see me run around naked anyway, certainly not in the light of day.

The other thing people don’t realize is we have a great sense of humor about this shit. I’m sitting there watching “South Park,” I’m a “South Park” character. I’m watching “American Dad” and the alien’s getting fucked in the ass by Stan listening to one of my songs. What the fuck? [Laughs.] “Family Guy” did a whole episode on “Africa,” which is hysterical, and I’m just sitting here watching this on TV and it comes up. A “Jeopardy” question. And so you realize, we’re part of pop culture. I love the Jimmy Fallon-Justin Timberlake summer camp thing, that was fucking hilarious.

How cool is it to be part of pop culture? People laugh, and nobody laughs harder than we do. But at the end of the day we plug in and fucking play and blow minds. That’s what we do.