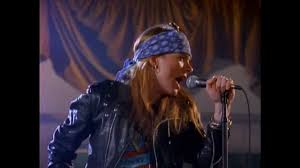 According to an EW interview with Cameron Crowe, Rose once delayed a show over a missing piece of wardrobe. During the promotion of his new Showtime series “Roadies,” Crowe was asked about the best roadie story he ever heard. Gleefully, it’s about Guns N’ Roses, who are acting quite well-behaved now.

I heard some roadies talking about how something had to be “yellow-jacketed” and I [asked] “What is yellow-jacketing?” They said, “There was a guy that worked with Guns N’ Roses, and there was a show and Axl Rose needed a yellow jacket that he’d left in England before he would perform. So a roadie was given the job to get on a plane as fast as possible, go to London, find Axl Rose’s yellow jacket, and come back so he could play the show.” The best part about that story is not that somebody had to go get a yellow jacket for Axl Rose, but that it became such lore among other roadies that it became a verb — to yellow-jacket.