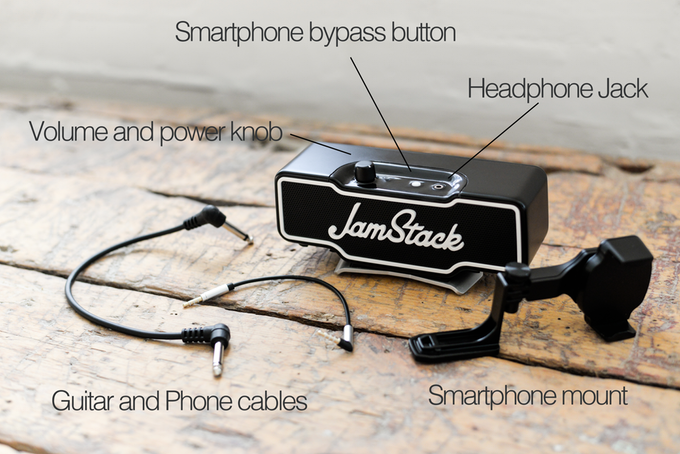 JamStack, the world’s first attachable guitar amplifier, picked up another great endorsement April 19. Founder, Chris Prendergast, was selected as the winner of the Startup Launchpad pitch competition at Canadian Music Week in Toronto! The honor comes with connections to some of the top investors in music, along with a $10,000 cash prize.

That’s great momentum going into Prendergast’s new Indiegogo campaign where musicians will finally be able to pre-order the Jamstack for just $148 starting May 2nd.

JamStack is a lightweight, portable amplifier that connects seamlessly with a smartphone for incredible effects, shockingly good tone and the ability to share music. It weighs under 2 lbs. (900 grams) and fits on the strap button of an electric guitar or bass – without modification. A spring load system and soft mount protect the guitar, and two short cords give guitarists 10-watts of sound and countless effects.

With JamStack, there is no need for heavy equipment or expensive computers. Pair it with smartphone apps like AmpliTube and AmpKit to add layered effects without wasting time on levels. Back tracks won’t drop out like regular amps. And since the phone is right on the guitar body, guitarists can set up loops on the fly, perform sequined samples, or record and share music effortlessly. JamStack is so small, it fits in a guitar case and runs for 8-hours on a single charge – perfect for road trips, parties and jamming on the porch.

It’s great for new guitar players too! Adjust the phone to hear the lesson and follow along on the screen. Plus, JamStack can be paired with Bluetooth to double as an ultra- premium Bluetooth speaker.

Prendergast will start taking pre-orders on May 2nd when he launches a new Indiegogo campaign, with shipments expected to arrive in August. JamStack has great momentum coming off a wildly successful KickStarter campaign that raised more than 325% of its goal last winter. That was enough to line up a high-end manufacturer for the first run.

Keep an eye on Prendergast, as he has other big events lined up including an appearance on Dragons’ Den in the new fall season. You can read more about Jamstack online at Jamstack.io.

Chris Prendergast founded JamStack out of a desire to add layered effects to his electric guitar sounds without expensive computer equipment. Using his background in electrical engineering, Chris built the ultimate gadget for guitarists. Overwhelming support and an experienced design team will soon bring JamStack to market to let musicians play whenever they get inspired.