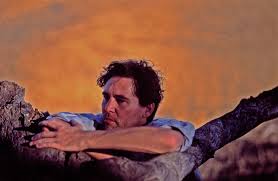 You mention that music-making isn’t as hard as it used to be. What changed?

When you’re young, you make anything hard on yourself. Anything. Everything. Your relationships are so fucking hard, and when they fall apart you’re so destroyed. Now I’m old and I don’t care anymore, you know? It’s bad, too. It’s a bad feeling sometimes, to not care as much. I was talking to a friend the other day, a friend who’s very adept at meditation, entrenched in zen. He’s totally entrenched in zen. We were talking about frustrations with other people. It can be anything. It can be a taxi driver snapping at you, or just how we interact with other people walking down the street, and the anxiety it gives us. What is tolerance? What would the yogis suggest we do with our intolerance? Where do we shove it? I think it was interesting even to just survey the topics of frustration with other people. Because even just talking about it is somehow soothing and makes it lighter. Everyone is so tightly wound these days, but you don’t know where the other guy is coming from. If some guy snaps at you for no reason, what if he just found out something terrible happened to someone he loved? You don’t know. Be nice. We’re all volcanoes at some point.