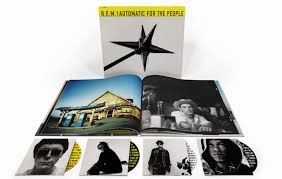 The 4-Disc Super Deluxe format includes a brand new remaster of the original album on CD 1, remastered from original analogue tapes by Stephen Marcussen under the direction of original Producer Scott Litt.

CD 2 features live tracks recorded at the band’s 1992 show at The 40 Watt Club in Athens, the year of Automatic For The People’s original release. This was the only concert that R.E.M. performed that year. The highly sort-after & acclaimed recording is remixed from the original multi-tracks by John Keane.

CD 3 presents a completely unreleased treasure-trove of 20 demo versions of all the tracks from the original album + unreleased songs from the recording sessions that didn’t make the record first time around & have been approved by the band for inclusion 25-years on.

A Blu-Ray disc rounds out the package featuring a pioneering Dolby Atmos mix of the album, making Automatic For The People the *first ever commercial album release* to present this immersive 3D sound technology for home consumption & playback. As well as the Dolby Atmos Surround & Hi-Resolution Audio mixes of the album, the Blu-Ray includes all the up-scaled original promo videos & the original Automatic press kit + more!

The four-discs are housed in a bespoke lift-off 12” x 12” boxset which also includes a hard-back book with brand new extended essay by acclaimed MOJO writer Tom Doyle, contributions from all of the band including memorabilia & unseen photos from Anton Corbijn’s album sessions.

A cut-down 2CD set will also be released featuring CD1 (Automatic For The People remastered) & CD2 (Live At The 40 Watt Club) in a rigid clamshell box, 2CDs & booklet.

A new reissue of the original album on 180-gram Heavyweight black vinyl, cut from original analogue tapes at Capitol Studios and download card.