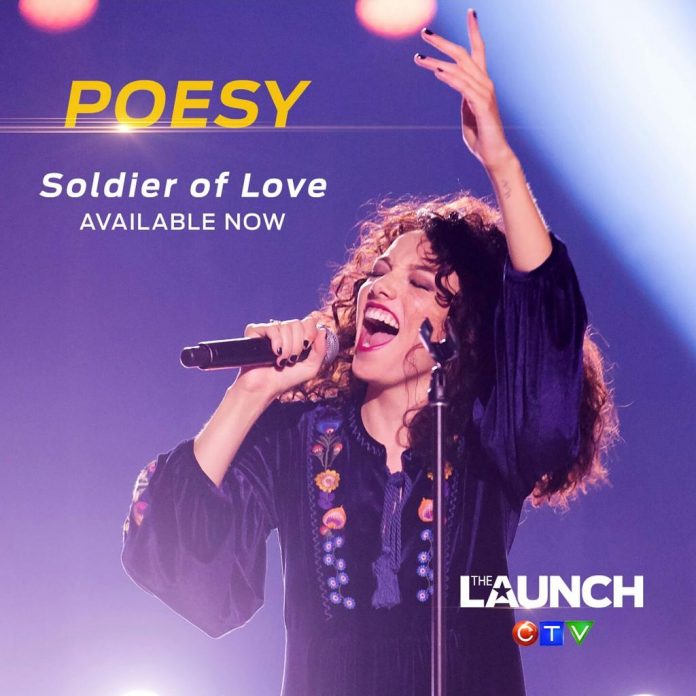 Viewers are standing at attention alongside Ancaster, Ont.-born, Toronto-based alt rock artist POESY, who was chosen from among the episode’s featured artists on tonight’s episode of CTV’s THE LAUNCH to record the new original single “Soldier of Love.” The series’ fourth single was released to radio stations across the country immediately following tonight’s broadcast, and is also now available to buy and stream everywhere, including iHeartRadio, Apple Music, iTunes, Spotify, and Google Play.

Last week, THE LAUNCH charted its third consecutive #1 single at iTunes Canada with Episode 3’s chosen artist The Static Shift‘s “Wide Awake”. This follows on the success of the series’ chosen artists and songs to date – Logan Staats “The Lucky Ones”, Elijah Woods x Jamie Fine‘s “Ain’t Easy”, both hitting #1 on iTunes Canada.

“After this unforgettable opportunity and my incredible experience on THE LAUNCH, I realized that this is exactly where I need to be,” said POESY. “I am excited to share my unconventional sound with the world, and I can’t wait to see where ‘Soldier of Love’ takes me. It was an honour to be mentored by industry legends like Fergie, Stephan Moccio, and Scott Borchetta.”

“POESY is exactly the type of artist we were hoping to find through THE LAUNCH…a raw and extraordinary talent on the edge of the mainstream with an identity and edge all her own,” said Scott Borchetta. “We have unleashed the lion known as POESY to Canada and the world.”

Additionally, original songs featured on THE LAUNCH have now surpassed 1.5 million streams internationally, with the songs launched to date collectively gaining traction in Canada, the U.S., and beyond North America – reaching listeners and fans in Germany, the U.K., Mexico, Brazil, Australia, Philippines, and more.

“This streaming milestone validates the crux of the program’s mission: to launch new artists and new music to the world – and the world is listening,” said Randy Lennox, President, Bell Media.

Streaming now on various platforms including CTV.ca, CTV GO, and CraveTV™, THE LAUNCH: DIRECTOR’S CUT features extended auditions of Ezra Jordan, Faiza, and the newly launched POESY, as well as Jaryd Stanley and Sariyah Hines, who are featured exclusively in the On Demand version of the episode. The special edition also features comprehensive mentor reactions, feedback, and never-before-seen moments from THE LAUNCH that take the viewer deeper into the once in a lifetime opportunity for each of the artists.

Following a moving audition process before the celebrity mentors, aspiring artists POESY and Ezra Jordan emerged as the two breakthrough artists chosen to perform and make the original song “Soldier of Love” their own.

After a nerve-wracking 48 hours in studio rehearsals, recordings, and working closely with the episode’s celebrity mentors, the final artists took the stage in front of a live studio audience to perform their unique interpretations of “Soldier of Love”.

Both aspiring artists dazzled the mentors with their spectacular and unique performances, but following intense deliberations, POESY was ultimately chosen for the opportunity of a lifetime – to have her alt-rock version of the song “Soldier of Love” launched across Canada and to the world via THE LAUNCH’s expansive slate of top music partners.

Following tonight’s song launch, Bell Media is poised to throw the full weight of its marketing, promotional, and publicity support behind POESY’s “Soldier of Love” across its national footprint of broadcast and digital entertainment properties.

After writing her first song at age nine, POESY is now fully immersed in the alternative indie world of music. Her name is derived from an archaic word for poetry, and is a callback to her time as an English and Creative Writing major at Western University. POESY finds inspiration in literature, 1970s rock, thrift stores, and bus rides to create the narratives present in her song writing. POESY’s infatuation with all types of art is behind the short story she wrote to accompany each track on her debut EP, “The Spotless Mind”. Her influences include Freddie Mercury, Katy Perry, Florence Welch, Kurt Cobain, and Stevie Nicks. To learn more about POESY, visit CTV.ca/TheLaunch.