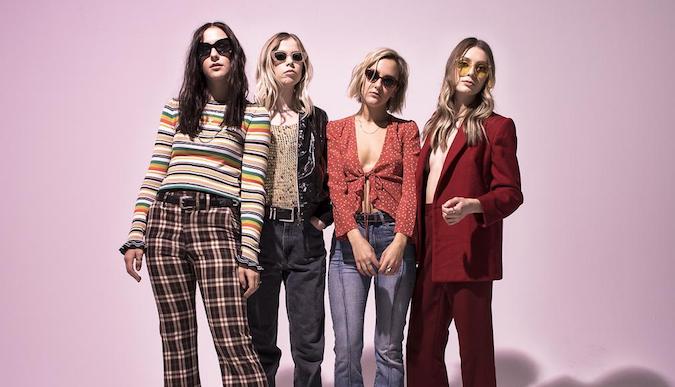 JUNO-nominated rock band, The Beaches, today announce their first-ever national headline tour in support of their debut album Late Show, released last fall via Universal Music Canada. Kicking off in Vancouver on April 21, “The Late Show Tour” will make 16 stops across the country before culminating in the band’s home city of Toronto on May 11 at the Opera House – a celebratory finish during Canadian Music Week. Toronto songwriter and indie music artist Taylor Knox will provide direct support for the duration of the tour. Tickets to “The Late Show Tour” are available for purchase from March 8 here.

Following the success of “Money,” the band’s captivating first single that reached No.2 at Alternative radio and was the Most Added two weeks in a row, The Beaches have also announced “T-Shirt” as their next official single. To celebrate its release, the band released a special “T-Shirt” bundle, which includes the original album version, plus a new acoustic recording of the track. “T-Shirt” is at Canadian radio now.

Also announced this week, The Beaches will perform at The Great Escape music festival in Brighton, UK this May after they wrap their Canadian tour. Late Show will be officially released on Virgin Records in the UK on May 18.

Comprised of sisters Jordan and Kylie Miller (on lead vocals/bass and guitar/backing vocals, respectively), Eliza Enman-McDaniel on drums, and Leandra Earl on keyboards, guitarand backing vocals, The Beaches have a natural chemistry that shines through in their music and live performance. Playing as a band since before their teens, The Beaches have had time to fine-tune their craft, a reason why their live shows have not gone unnoticed.

The band’s debut album, Late Show was produced by Emily Haines and Jimmy Shaw of five-time Juno Award-winners Metric, and was mixed by multi-Grammy Award-winner Tchad Blake (Arctic Monkeys, The Black Keys, U2). The Beaches’ influences are wide-spanning, including David Bowie, The Strokes, The Rolling Stones, St. Vincent and The Pretenders, which all in one way or another shaped this record.

With two self-released EPs under their belt and Late Show out now, The Beaches have already toured North America and the UK, and performed at Canadian festivals including Festival d’été de Québec, Osheaga and WayHome. Most recently, the band provided direct support for Death From Above on their North American tour, and they have also opened for such acts as Eagles of Death Metal, Alvvays, July Talk and several other acclaimed artists. This winter, The Beaches were nominated for their first-ever JUNO Award for Breakthrough Group of the Year (2018), and they were also nominated for a 2017 CASBY Award for Favourite New Artist.