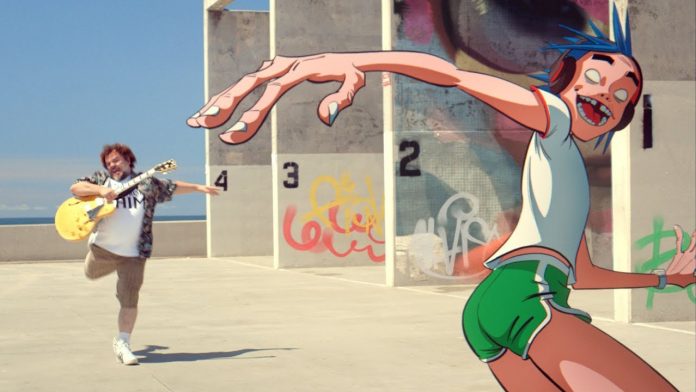 A brand new studio album from Gorillaz titled The Now Now will be released by Warner Bros. Records on June 29, and they just announced a North American tour.

The Now Now is 11 all-new songs from the World’s Most Successful Virtual Act, produced by Gorillaz, with James Ford and Remi Kabaka, and recorded entirely at Studio 13, London in February this year.

In contrast to the cast of characters that joined the apocalyptic party thrown by Damon Albarn and his cartoon crew on last year’s multiple-GRAMMY-nominated HUMANZ , The Now Now sees the band largely eschewing guest stars, taking it back to the core Gorillaz crew: blue-haired, sweet-natured dreamer 2D on vocals; whip-smart Japanese badass Noodle on guitar; Brooklyn-born philosopher and the meat–behind-the-beat Russel Hobbs on drums. And with Murdoc Niccals temporarily indisposed, bass duties on the new album have been taken up by erstwhile Gangreen Gang member Ace (explaining the “FREE MURDOC” signage that’s been popping up everywhere from Coachella to the Kentucky Derby to Change.org and Reddit).

A sun-drenched new video for “Humility”—the single premiered today on Zane Lowe’s WORLD RECORD on Beats 1 on Apple Music–starring a roller-skating 2D and a busking Jack Black, was directed by Gorillaz co-founder Jamie Hewlett and filmed entirely in Venice Beach, California last month – watch it below.

Gorillaz also announced they will bring The Now Now Tour to North America this fall, produced by Live Nation, and culminating in the U.S. debut of Gorillaz’ own acclaimed Demon Dayz Festival. The “joyful apocalypse… and carnivalesque festival of great performances” (The Guardian)” curated by Damon Albarn and Jamie Hewlett, promoted and produced by Live Nation – will make its exclusive appearance for this year at the Pico Rivera Sports Arena & Grounds in Los Angeles on October 20th, just 10 minutes from downtown L.A..

The Demon Dayz L.A. lineup will be comprised of special guests and collaborators from within and beyond the Gorillaz extended family. Information on ticket sales and additional attractions will be announced shortly.

See below for The Now Now Tour itinerary which will kick off October 8 in Toronto, ON and make stops in Montreal, Philadelphia, New York, Boston and Chicago. The Internet will support on all headline dates, with Little Dragon joining as special guest for the Boston show. Tickets for all dates will go on sale to the general public beginning Friday, June 8th at 10am PST at Ticketmaster.com. American Express® Card Members can purchase tickets before the general public in the U.S., beginning Friday, June 1 at 10am local through Thursday, June 7 at 10pm local and in Canada, beginning Monday, June 4 at 12pm local through Thursday, June 7 at 12pm local.

The Now Now is available as a single CD, vinyl, at all global digital partners, and as a collector’s edition Deluxe Vinyl LP Box Set.

* with The Internet
** with Little Dragon